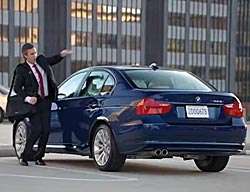 After nearly five decades, Avis Car Rental is scrapping “We Try Harder” for a new tagline.

The effort is under the direction of Jeannine Haas, chief marketing officer, Avis Budget Group, who took over the position a little over a year ago after having worked for American Express and Ford Motor Co.

"Brand marketing to drive profitable growth is one of our strategic growth initiatives," Haas said in a release. "This campaign is our latest effort in delivering against this key objective."

The effort was created by Leo Burnett Business, who was recently appointed Avis' advertising agency of record. Media planning, buying and placement is being handled by Spark, a division of Starcom Media Group and Avis' media agency of record.

The campaign seeks to “redefine and elevate the role of the rental car in corporate travelers' busy lives” by centering on “how business professionals use the space inside the rental vehicle to be productive and recharge when traveling,” according to the company.

TV depicts a variety of business travel scenarios. "Rock Out" shows a business professional practicing his upcoming presentation by singing the words out loud while he's driving to the meeting. "Bizcation" highlights a worker having a challenging day on the job and the relaxation he feels as he jumps into his rental car.

Finally, "Deal Closer" shows a group of co-workers utilizing their rental vehicle to prepare and "get psyched" for an important meeting, and then hours later, driving to the golf course to celebrate success.

"We recognize that busy professionals are always on the go and yearn for more control over their day," said Haas in a release. "The new campaign illustrates how an Avis rental vehicle gives customers that control so they can prepare for a meeting, recharge or just be themselves.”

The campaign's initial flight will run through November 2012. The TV spots will air on network and cable television and will be supported by print advertisements in national newspapers and business publications such as The Wall Street Journal, The Economist and Sports Illustrated, as well as online media and airport terminal displays.

In addition, Avis will unveil an experiential iPad campaign that brings to life the idea of "It's Your Space" through a series of highly interactive scenarios, including "Your get amped space," "Your inner peace space" and "Your game on space."