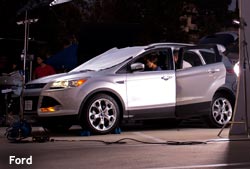 Ford is launching new TV ads and a web-centric comedy series that extends its campaign for the 2013 Escape compact crossover, which the company says is the fastest-selling vehicle on Ford dealer lots.

The TV campaign, under the “Go Further” brand banner, continues Ford's tactic of using real people in testimonial style, but this time the real people are engineers and designers who were involved in the Escape development process. The ads show how Ford employees are "going further" in the features they developed for the vehicle and how their own life experiences inspired features like Escape's hands-free liftgate, the Eco-Boost engine and MyFord telematics.

The ads feature: Scott Makowski, a powertrain engineer who worked on Escape’s two available EcoBoost engines; Erika Tsubaki, design supervisor for Ford of Europe, who was involved in exterior and interior design; Vince Mahe, the engineer behind the hands-free liftgate (the ad shows how Mahe noticed people often have their hands full when they are trying to open a vehicle's rear liftgate); and interface engineer Jennifer Brace, who works on the Sync and MyFord Touch systems.

“Escape My Life is a thoughtful and respectful approach in the way Ford, and the Escape, is engaging with the consumer–- we are not talking at them, we are showing them the Escape and how it is used in daily life,” said Brock Winger, digital marketing manager for Ford, in a statement.

The Escape vehicle is central to various hijinks involving Browning and Gruber. The automaker says the idea was to jettison the traditional online banner ads and feature-benefit commercials and spotlight the vehicle in the context of everyday life. The series will run for eight episodes on its own YouTube channel as well as Hulu, AOL, MSN/Wonderwall, GlamMedia, Tumblr, Facebook and other online outlets, per the automaker.

“The series reaches out to consumers where they are at in their media consumption behaviors – we are not interrupting them and forcing them to go somewhere else or stop what they are doing in order to watch and enjoy the content,” Winger noted.