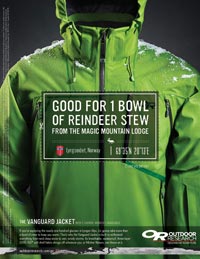 When Outdoor Research got its fall campaign ready, it wanted to find a way to market the brand that wasn’t as serious as many of its competitors in the world of technical outdoor gear, but not slapstick, either.

“We did not want a funny campaign,” Charles Lozner, director of marketing, tells Marketing Daily. “We wanted our campaign to be fun.”

The result is a delightful spoof on couponing meant to appeal to the adventurer in its customers. A print ad for its Vanguard Jacket (a garment helpful to heli-skiers like Lozner) contains a coupon that can be clipped for a bowl of reindeer stew from the Magic Mountain Lodge in Lyngseidet, Norway. The voucher on the ad for its ultrawarm, bright-green Incandescent Hoody can be redeemed for “1 shot of homemade vodka at the Vernadsky Research Base.” (It’s in Antarctica, and known as the world’s southernmost bar.)

Using the tagline “Go Where Others Don’t,” the campaign is from TDA_Boulder, and features close-ups of the high-tech apparel. Print is running in such titles as Outside, Powder, Backpacker, Alpinist, Backcountry, and AMC Outdoors.

The idea came from a brand audit and focus groups, he says. “We really felt like our customers -- even though they have a day job and some might call them weekend warriors -- go on these amazing adventures. So we wanted a campaign that told both a product story and a customer story, to get at the personality of the brand.”

All seven of the places mentioned in ads came from a survey of its brand ambassadors. “We asked them, 'What is the craziest place you’ve been, and what local cuisine or drink was the most memorable?” And, yes, for the hardy souls who actually make the trek to the seven destinations in the campaign, OR will honor the coupons: The adventurer just has to post a photo on the brand’s Facebook page.

“We wanted to focus on what we call Type 2 fun,” Lozner adds. “We know no one is going to go all the way to a remote part of Pakistan just for a slice of walnut cake. But it speaks to the idea that our customers travel the world not just to ski or climb or whatever, but to explore the whole experience.”

Outdoor Research, which competes with such brands as REI (which is also a customer), Patagonia and North Face, is focusing on outerwear in the campaign. Lozner says ads next spring, which will evolve from this campaign, are likely to center on accessories.