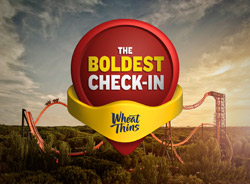 “The Boldest Check-In,” running Sept. 1-3, will enable guests at three Six Flags theme parks to check in to their Facebook pages from atop a moving roller coaster.

The first 100 riders at each park who have successfully checked in will receive an exit pass allowing them to skip the line and ride the roller coaster again.

In addition to the exit passes, Wheat Thins will be passing out samples of the Spicy Buffalo and Zesty Salsa cracker varieties.

The promotion will be supported with custom video commercials airing on Six Flags’ TV digital out-of-home television networks and Wheat Thins’ social channels. The ads challenge riders to participate by declaring, “Finally, a check-in worthy of a check in.”

In addition, signage will be provided through Six Flags’ in-park Media Networks, and both Six Flags and Wheat Thins will implement online and social efforts.

The Boldest Check-In concept was created by agency AKQA, working with Intellitix, which provides RFID solutions for live events.

Prior to this promotion, Wheat Thins set the stage with a different, Instagram-driven promotion dubbed “The Boldest Coasterface.”

Between Aug. 3 and 30, fans were encouraged to post photos of themselves pretending to be on a roller coaster on Instagram, using the hashtag #coasterface, then get friends to “like” their photos. Each week during the promotion, the 10 participants with the most likes on their photos were awarded two tickets to any U.S. Six Flags theme park.

Both efforts are extensions of Wheat Thins’ “Do What You Do” campaign. The campaign launched in January with a TV ad featuring “Family Guy” characters Brian and Stewie, and introduced spots featuring Tracy Morgan of "30 Rock" and Alex Trebek of "Jeopardy" (eating the bold, new flavors) in March.

The campaign’s theme is that Wheat Thins is the snack that goes with whatever its fans most like to do.