Levi's Goes 'Forth' On Flipboard 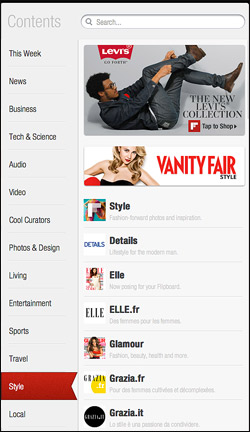 Levi's is putting a new twist on its annual fall “Go Forth” campaign with a glossy virtual spread in social newsreader app Flipboard. The effort introduces a new ad format that Flipboard calls a “brand magazine,” which combines all the images, content and social elements tied to a campaign into a single channel in the iPad app.

When a reader taps on one of the full-page Levi's ads running in Flipboard, it opens a catalog showcasing stories and photos that the apparel brand shares on Facebook and Twitter, video packages from YouTube and featured products. Users can also shop directly from the ads while flipping through Levi's fall collections.

“There's very little work on the advertising side, making Flipboard a simple way to reach millions of people reading on mobile devices,” stated Christine Cook, head of revenue at Flipboard.

With the app recently hitting 20 million users, Flipboard is ramping up advertising to monetize its growing audience. It introduced full-page, magazine-style ads last year and in recent months, and has run ads from marketers including Verizon and Universal Pictures. According to a Bloomberg story this week, ad prices range from $25,000 to $1 million, depending on the scope and design of the campaign.

Entering its fourth year, Levi's Go Forth campaign that kicked off last month centers on a 60-second film directed by cinematographer Lance Acord showing various young urbanites putting on Levi’s jeans as they start the day. Last year, the company used a short film from Wieden + Kennedy, intended to reinforce the brand's "now is our time" message.