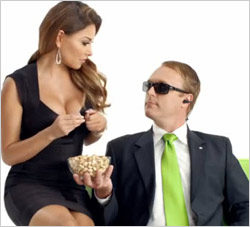 Over its four years, Wonderful Pistachios’ “Get Crackin’” campaign has become something of a pop cultural barometer.

The latest 15-second videos -- a $30-million campaign launching Sept. 17 on primetime shows including “Survivor” and “X Factor Results” -- also key into trends of the moment.

Featured subjects include the once-again ironically retro-cool Village People, who “do it like macho men,” and Brobee, the fuzzy green star of the popular Nick Jr. show “Yo Gabba Gabba!” (who does it “cause it’s yummy”).

The there’s the Secret Service, who “do it…and get fired for it.” (Agents in sunglasses and earphones are shown on a couch, being fed nuts by buxom women in revealing dresses.)

In addition, the brand has released a video tying in with Disney’s upcoming Tim Burton movie, “Frankenweenie.” That spot, featuring the “Victor” and “Sparky” characters from the movie, will run in 3-D in theaters in the weeks leading up to the movie’s premiere on Oct. 5. The video promotes the film’s opening as well as the pistachios.

In an associated contest, specially marked packages of the pistachios are carrying reward codes that can be input online to enter for chances to win a free ticket to the movie.

Mark Masten, VP global sales and marketing for Paramount Farms, producers of Wonderful Pistachios, said that the videos’ subjects were chosen to appeal to fans of all ages, as well as to encourage social sharing.