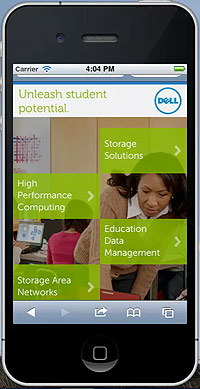 To promote its educational technology products, computer giant Dell this summer ran a first-of-its kind campaign for the company that ran across Web-connected TVs, the desktop Web and mobile devices. The aim was to track individual consumers across the three platforms to correlate the impact of one channel with the other two.

“This type of campaign allowed us, for the first time, to have an integrated, cross-channel dialogue with our target demographic across their multiple connected devices, further reinforcing our educational technology messaging,” said Mary Ellen Dugan, Dell’s executive director of global brand and advertising.

“However, within that site/app list, we targeted consumers who had already seen the connected TV ad and those who had not, so we were able to see the difference in performance between these two groups,” he said. The ability to reach the same users across multiple devices helped Dell to approach the campaign in terms of audience rather than specific channels, he noted.

After the campaign ran for a month from mid-July to mid-August, Joule and MediaCom found a 68% lift in the time viewers spent on Dell’s mobile site compared to viewers who only saw the ads on a single device. “Our research shows that consumers who see ads on more than one device are far more inclined to take action,” said Tapad CEO Are Traasdahl.

The company says its tracking technology doesn’t use personally identifiable information (PII) and that it provides clear and persistent opt-out notification to consumers.

According to a recent study by YuMe and research firm Frank N. Magid Associates, 30% of all Internet homes have connected TVs, and users of those sets are generally receptive to advertising. Almost 90% said they noticed ads on the platform, with 60% noticing pre-rolls. People were also more willing to watch ads in exchange for getting free content than paying a fee.

Without connected TVs, Collins said it wouldn’t have been possible to link a specific TV and smartphone to the same person in the Dell campaign. “This cross-channel engagement is the beginning of a big shift in how brands will communicate with their consumers,” he said.