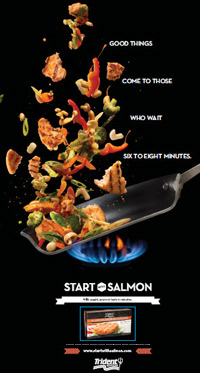 The privately-held, American-owned harvesting, processing and marketing company is a major supplier to the restaurant/foodservice industry and grocery and club-store retailers.

While Trident isn’t big on revealing its stats, prepared seafoods accounted for 40% of its revenue -- with sales growing at double-digit percentages -- as of 2009, according to Puget Sound Business Journal. Trident Seafoods brands like Louis Kemp, acquired in 2006, Sea Alaska, SeaLegs and Rubenstein’s are retail staples -- and Trident Salmon Burgers are the #1-selling brand in their category.

Still, when it comes to consumer awareness, the Trident Seafoods brand itself has had a relatively low profile.

Now, following a retail distribution push, the company is out to change that with an integrated consumer marketing campaign around Trident-branded products, starting with the salmon burgers.

Working with Seattle-based agency Cole & Weber United, Trident has launched advertising efforts in Minneapolis and Tampa -- two of the U.S. markets where the salmon burgers, along with the Trident Ultimate Fish Stick, now have “critical retail mass” (70% all-commodity-volume or ACV), according to Trident Seafoods VP, marketing Randy Eronimous.

Americans are crazier than ever about burgers and increasingly aware of salmon’s healthful properties, and about two-thirds of U.S. consumers are open to eating seafood on a regular basis, notes Eronimous. But the salmon-burger concept is still a new one to many.

The campaign focuses on making busy moms aware of Trident Salmon Burgers (made entirely from wild salmon fillet, with the bare minimum of binders, plus spices) as a healthy, tasty, versatile and convenient meal solution.

Radio is one core element. Humorous, 30-second spots feature “the world’s foremost salmon experts” – a bear and an eagle – affirming, in grunts and squawks, that Trident’s gourmet salmon burgers are “the easiest way to prepare salmon in minutes.” (Far easier, they attest, than chasing salmon upstream or plucking fish from a stream.)

The spots encourage consumers to look for the product at a nearby grocer, or visit startwithsalmon.com for recipes, pairings and retailers carrying the salmon burgers.

The radio buy is targeted to PM drive-time and weekend mornings, when moms are thinking about preparing dinner or making their main weekly grocery-store trips.

In addition, Trident is using top female DJ’s in each market to leverage their influence and demonstrate, through recipe contests and giveaways, the variety of ways that the frozen salmon burgers can be prepared to make meals in minutes.

The campaign also includes digital ad banners and take-overs on targeted recipe-search destinations like Allrecipes.com, and outreach to bloggers in the BlogHer network, who are being encouraged to try the salmon burgers and write about their experiences.

In addition, a series of out-of-home ads are being featured in Gold’s Gym and other franchise and independent gyms in the markets. These ads visually illustrate the various ways to use the salmon burgers to create meals (paired with veggies and bacon on a bun, mixed into salads, or served stir-fry style on a plate, for example), and prominently display the “start with salmon” tagline and the URL for the site of the same name.

“The gym ads are designed to reach and connect with moms at a time when they’re particularly health-conscious, and also thinking about what they’re going to make for dinner,” notes Britt Peterson, partner and director of growth strategy for Cole & Weber United.

In addition to recipes and a store locator, startwithsalmon.com offers a “foodie gallery” featuring the OOH ad images and a video, also viewable on YouTube, of a salmon burger sizzling in a pan. Rotating messaging under the pan stresses the ease and speed of the cooking process. Also in view: an animated timer reminding site visitors that “it takes six or so minutes to cook a Trident Salmon Burger,” with accompanying suggestions for  things to do while you wait, like “update status on Facebook,” “catch up with celebrity gossip,” “make guacamole to go with the salmon” and “write reminder note to buy more salmon.”

Is a national campaign on the drawing board? For now, Eronimous says that pre- and post-analysis of the campaign’s performance in the two markets will guide the company’s next moves on the Trident brand-building front.