Hitachi Shows Off Its Social Innovation 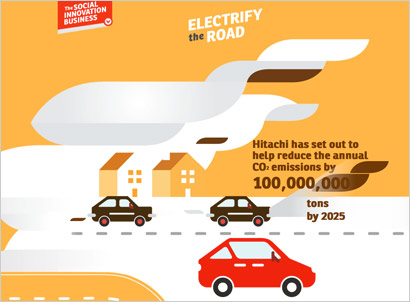 Known mostly to consumers as a maker of consumer electronics (such as cameras and screens), Hitachi America is much more than that. It’s a provider of technology to several industries, helping them achieve business goals effectively. In a new digital brand campaign developed by MRM Worldwide, Hitachi employs a simple infographic format to showcase this work, which it calls Social Innovation.

“Hitachi is one of these massive technology companies and enterprises that you’ve heard of, but you don’t really know what they do,” Michael Mclaren, president at MRM East, tells Marketing Daily. “What we’re trying to do is clarify the types of technologies that Hitachi is bringing to market that are driving innovation.”

The digital banner ads showcase four industries where Hitachi has staked out a leadership role: automotive, IT, medical, and power. Along with simple, line-drawn illustrations, headlines state how Hitachi’s innovations “are at work all around you.” One illustration highlighting the power industry shows two electric towers connected by cable and the headline “Improve the Air.”

“The digital world is evolving and, by using an infographic campaign, we can tell a story in simple terms,” Lauren Raguzin, Hitachi’s director of branding and corporate communications, tells Marketing Daily. “Many of the companies [we work for] are diverse, and putting that in a print ad is difficult.”

The campaign is targeted at C-level executives and business decision makers and will run through March 2013. The digital campaign will run on online media outlets such as Atlantic, Bloomberg Businessweek, Forbes, Harvard Business Review, Google, LinkedIn, Politico and the Washington Post.

MRM also created a microsite where visitors can explore and learn more about Hitachi’s expertise, such as showing the company’s open MRI system or its cutting-edge proton beam cancer treatment. Using a technology called Parallax Scrolling, the Web site’s animation continues as users scroll down the page to read the stories.

“The objective is to get people to be fully aware of the technologies that Hitachi is bringing to market,” Mclaren says. “And we’re doing it in a way that allows us to tell a complex story in a human and engaging fashion.”