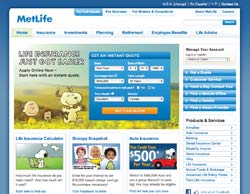 Life insurance doesn’t exactly seem like a likely spot for digital innovation. After all, it’s an American industry that’s actually older than America (the Corporation for Relief of Poor and Distressed Presbyterian Ministers, eventually owned by Nationwide, started selling policies in 1759). Sales of term life insurance, the most commonly owned, have been in decline since 1960.
And while digital channels have done wonders for consumers’ need for instant gratification, buying life insurance takes practically forever: It’s typically a six-week path from a customer’s first inquiry to an actual policy. “Of 10 people who initiate the process,” says Amir Weiss, vice president of digital for MetLife, “less than one actually winds up buying it.”

An additional problem is that the industry has gotten increasingly sophisticated at assigning risk, thanks to blood work and exams and physicians’ statements, “and that’s been at a cost of becoming too expensive when you’re selling insurance in lower amounts, effectively driving the business upmarket. As an industry, we’ve been less successful penetrating the middle market. So even though many middle-income people want and need the product, they were finding it difficult to buy,” says Weiss.

Digital efforts are changing all that, and in addition to initiatives begun over the last several years, the company is currently moving forward with its most focused, intricate method of display advertising yet. (MetLife is the largest advertiser in its category, according to snl Financial, and spent $540.5 million in 2011, up 22.8 percent from the prior year.)

“For us to go out and find people that have been left behind this way is enormously important for us,” Weiss says. “We’re a company that has relied, pretty much, on the same distribution channel for the last 140 years.”

Essentially, for digital innovators like MetLife and Merkle, its agency, breakthroughs in data are changing marketing funnel-nomics, making it easier for them to find the prospects at different points on the path to purchase, and target them with banner ads that will guide them along the way.

MetLife was able to determine that “a certain type of consumer goes through the purchasing funnel at multiple time higher than others,” Weiss says. Specifically, it was able to identify households with $100,000 or less in income, and with a preference for working with a company in a direct way, either over the phone or the Internet, with subgroups falling into categories like, “concerned moms” or “young professionals. “Because we have very specific ways of retargeting these people, we can bid in a way that is much more efficient,” notes Weiss. “We’re fighting fewer eyeballs.”

“That’s what’s really exciting,” says John Lee, senior vice president and general manager of Merkle’s insurance and wealth management practice. “Truly targetable display, with the inventory that’s available and the capabilities from an ad tech perspective, is really reaching some scale at this point, and picking up speed. We can drive more precise high-performance display than ever before.”

A favorite example of Lee’s is a consumer who starts buying diapers on Amazon. “There are a ton of inferences you can draw about the life event that is going on and what it means, and Amazon has something like 150 million users. That’s a targetable universe that once upon a time, direct marketers would have killed for. If you can marry a platform back to your ability to have all your customer data, and then bring all those pieces together, you can create unprecedented business results. It’s the No. 1 thing we’re all talking about.”

And of course, the rise of real-time bidding buying systems, through automated trading desks, is also fueling the transformation. There’s also a massive amount of consumer data now available to advertisers of all sizes, from a company like MetLife to the smallest Web site.

“We’ve come such a long way from the early days of display, where we would call a Web site owner and negotiate,” says David Booth, a consultant and founding partner at Cardinal Path, a digital marketing agency, and coauthor of Display Advertising: An Hour a Day. “With rtb taking in information from so many data points, we are now bidding for those slots in about a third of a time it takes a human being to blink. It’s truly amazing.”

Over and above those changes, “when you add in this enormous amount of third-party data that comes from browsing patterns being tracked, advertisers of all sizes can learn so much. John Wanamaker would be very happy with display advertising,” says Booth.

But because the targeting display business is still in its relative infancy, practitioners say there’s a lot of room for improvement. “It is a nascent industry, and many marketers don’t understand how to use this technology. They’ve got a lot of data, and they are not even using it yet,” says Booth. “And some are using it badly. Here’s one I hate. I shop, and put something for $10 in my cart. Right after I leave the site, they start chasing me with offers, including the same product, but now it costs $5. So instead of feeling good about the purchase, now I feel like this company just stole $5.”

Excessive retargeting is Lee’s pet peeve, as well. “Everyone says retargeting is the most efficient method to reach people, but then they will absolutely kill you with it. Of course, the agency would probably say it still outperformed, but hey, you probably would have done even better if you didn’t annoy the crap out of everybody and cost me 30 percent of spend that I didn’t need after the first four times. Hopefully, the industry will get better at that. More companies will realize that just because you can do something doesn’t mean you should.”
The flipside, of course, is the gratification that comes with a company getting its display messaging right. “I bought a big bag of dog food online recently for delivery, about a month’s worth,” Booth says. “And sure enough, at the end of the month, I started seeing dog food offers — that’s smart retargeting.”

And as those offers smarten up, Booth thinks consumers with privacy concerns will be less concerned about freakishly specific ad targeting. “These privacy debates are big issues around the world,” Booth says. “Today, our lives are being led online and that’s scary to many people, and we’re still in this initial recoil phase. But as people begin to realize they aren’t being targeted personally — for example, by Social Security number — but by behavior, they will mind less. They will realize they like the Internet being free, and that means advertising. And they will decide that if they have to see ads, they might as well see ones that are relevant to them.”

While the industry is enjoying the thrills that come from innovations in collecting data to drive smarter buying, and then smarter buying via rtb, Lee concedes that conversations about the actual formats used in display are pretty tame by comparison. But even there, he sees innovation ahead. “We’re seeing clients test the video they’ll use for display alongside tv. There’s a lot of convergence.”

But yes, the actual display advertising is still pretty dull. “The industries for whom display has to be accountable? They don’t care what it looks like,” says Lee. “Time and time again, it’s often the ugliest and plainest creative that wins.”

Weiss agrees. “In our testing, we continue to get reminded that people want a straight message. Our best advertising is very clear about what it might cost you, and what you should expect in the buying process.”

But as marketers continue to test the best display methods for their business model, “there is a huge opportunity,” says Booth. “With the rise of mobile, the mobile app, the tablet and the minitablet, advertisers are really having to differentiate their methods, adapting and reinventing as they go.”

Adds Lee: “Display, through integration, truly has the potential to be the most accountable digital method there is.”