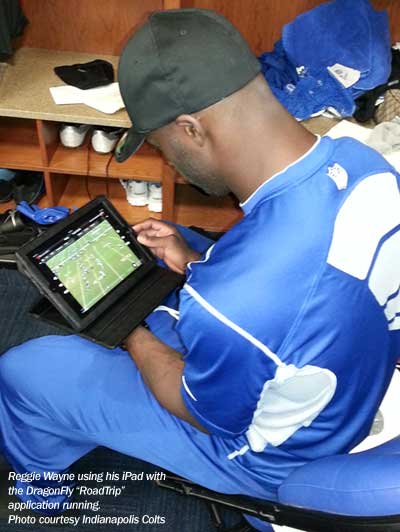 It’s no secret that football and technology go together like ranch dressing and wings. From the old (instant replay technology, those magical yellow first-down lines) to the new ($25,000 fines for sideline Tweets), it’s a sport that’s always looking for the next competitive edge. (We’re still waiting for the day footballs are equipped with sensors, so we know when they break the goal line, and fans can wear headphones that let them eavesdrop on Tom Brady’s huddles.)

But nothing has caught on as quickly as the humble iPad, which is now used by a wide swath of college and professional teams. OMMA’s Sarah Mahoney caught up with Chad Q. Brown, business director for DragonFly Athletics, a Tuscaloosa, Ala.-based tech firm, to find out why drafting the tablet has been so transformative:

First, why is football so tech-hungry?

In athletics, coaches are always proactive in anything that can give them an advantage. And football tends to have the biggest roster at colleges, and the biggest budgets. So they lead the charge. They’re proactive in technology for recruiting. And now, cloud-based software and mobile devices allow them to download video and study their opponent anywhere, and it’s continuing to evolve.

What, exactly, does DragonFly do for teams?

It’s like iTunes for college sports. We manage all the coaching video around the u.s., the video shot internally by coaches. Instead of people sending it in the mail on a weekly basis, you can now download it. There is some security around it too, so if there is video I don’t want you to see, you won’t.
We have 100 percent of the market of Division 1 and Division 1-aa, so we have a monopoly there with our core product. And then we have 70 percent of men and women’s basketball, and just under 50 percent of Olympic sports.
It’s different for the teams who use our product in the nfl.

Colleges are using it as a teaching tool. And for the nfl, it’s functioning primarily as a playbook.

The iPad became the tool that was cool. So coaches knew that, and would use it to show kids slideshows and video. When they realized the potential, they turned it into a student experience: It’s a one-stop shop for players. It’s a tool for learning—that’s why we give it to kindergarten kids. Players can take notes, have their playbooks, which are easily updated, calendars, communications with the athletic department. In fact, Ohio State University recently said it plans to buy iPads for every student athlete.

Our app and software integrate with a school’s editing software, so now they can pull out video and access it at Starbucks, and talk to their coaches.

The Baltimore Ravens and the Tampa Bay Buccaneers were among the first to experiment, and you’ve said The Miami Dolphins and The New Orleans Saints have been out front, too, with something like eight more teams in the NFL adding iPads last season. But some teams are still holding out. Why?
Certain teams, certain coaches, certain gms, they are nervous about being early adopters. They want other people to be the guinea pigs. And the New York Giants won the Super Bowl last year without an iPad system.
But more and more teams are signing on, and even though it wasn’t introduced until 2010, I think that by 2013, every team in the nfl will be on it.

Playbooks are the most closely guarded assets in the NFL. What are the security fears?

If the team buys the iPad, not the player, there is much more control. You can block players from downloading Angry Birds, for example, or social networks. You can control updates.

How does it help coaches and players?

Honestly, it’s about quality of life. It’s a big deal that a coach can watch video at home, or use it to Skype or Facetime with his players, and still put his kids on the school bus.

Why is it a game changer?

I can see a day when the tablet is being used on the sideline, to replace the paper pictures they’ve been using for over a decade. I think when it comes to statistics and analysis during the game, the field is wide open. And I think it will eventually be a great way to engage fans.