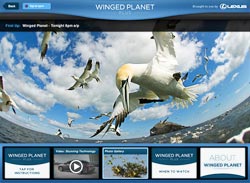 As networks look for ways to capitalize on the TV-tablet nexus driving much of the growth in simultaneous viewing, Discovery has signed Lexus to sponsor a "Winged Planet Plus" app. The iPad app works along with the eponymous Oct. 6 TV special co-produced by Discovery and the BBC.

The app is free for download on the iTunes store. Viewers can also link up with the real-time synced content online at Discovery.com.

Lexus previously backed a similar iPad effort with ABC. One of the more well-known examples of advertiser involvement to take advantage of what NBCUniversal refers to as a SimViewer was AT&T in the launch efforts for Conan O'Brien's TBS show.

“Winged Planet Plus” includes 100-plus exclusive content options; audio-syncing allows for the real-time interaction. Content available on the iPad stretches from added and deleted scenes, as well as trivia and photos.

One of the opportunities for advertisers is running commercials in a show in concert with second-screen exposure. Lexus’ deal covers a presence on the app, stretching from video to a photo gallery to quizzes. It will also receive mentions on-air during the two-hour special.