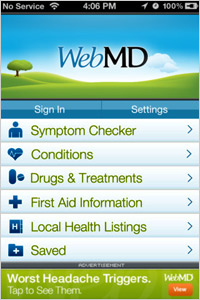 More people than ever are using their cell phones to get health information. The share of mobile users doing so has gone up to nearly a third (31%) from 17% two years ago, according to a new survey from the Pew Research Center’s Internet & American Life Project.

Smartphones are driving most of that activity. More than half (52%) of smartphone owners are looking up health information on their devices, compared to just 6% of regular cell phone users. Younger, better-educated adults, minorities and caregivers are also more likely to use their phones to get health information.

M-health has long been seen as an area of opportunity for health providers, pharmaceutical companies and other industry marketers. A GSMA forecast estimated the mobile health market would grow to $23 billion by 2017 across mobile operators, device vendors, health providers and publishers.

The Pew report identified certain demographic groups as heavier mobile health users: African-Americans, college graduates, women, those with an annual household income between $50,000 and $74,999, and those between 30-49.

Given increased public awareness about tracking of app use by developers and third parties, it’s possible privacy concerns play a role in holding back downloading of health-related apps. A separate Pew report released in September found privacy considerations are leading most app users (57%) either to remove particular apps, or to decide against installing them.

Exercise, diet and weight apps are the most popular types of health apps. Some 38% use an app to help track their exercise regimen, 31% monitor their diet, and 12% use an app to manage their weight. Other health apps track blood pressure, pregnancy, blood sugar or diabetes, and medication. The WebMD app was cited by 4% of survey participants.

The latest study also showed few mobile users are texting for health-related reasons. While an estimated 80% of cell owners send and receive text messages, only 9% get any text updates about health or medical issues. Women, and those between the ages of 30-64, are more likely than other cell phone owners to have signed up for health text alerts.

The Pew findings are based on a national survey of 3,014 U.S. adults fielded between August and September. The survey involved a mixed landline/cell phone sample and interviews were conducted in both English and Spanish.