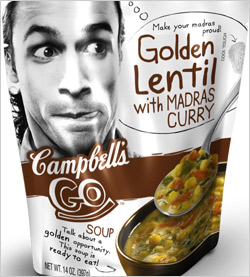 Good students know research matters. And for its new youth-skewing line of soups, "Campbell's Go," the company has done its research, about 18 months’ worth (enough time for a course-loader to earn a Masters) to get insights around what 20- and 30-somethings want in life and food. And it's not a can of chicken Manhandler. It's flavor mashups like Creamy Red Pepper With Smoked Gouda, and Chicken Quinoa with Poblano Chilies -- two of the six soups under the new "Go" umbrella designed to appeal to peripatetic, multicultural young adults who grew up eating diverse cuisine.

The company is hitting target markets to tout the pouch-based soups with "communal table" tasting events (think Pain Quotidien) with influencers and press. At one such program in New York’s Soho on Tuesday, Darren Serrao, general manager of innovation and new business development for the company, explained that the new line of soups also reflects a major shift since Denise Morrison became CEO a year and a half ago.

"From that point, we started to do things differently than most CPG companies. We created breakthrough teams comprising smaller, dedicated work groups -- each one autonomous, self-directed and cross-functional," he said. Each comprises a marketer, researcher, R&D person, a chef and a packaging engineer. "While most companies start with ideation around a product, we set out to solve problems, spending lots of time with consumers in the process." Thus, he said, the company didn't set out to make new soups, but to address the fact that younger consumers love convenient meal options, but not so much purchasing it in grocery stores.

Campbell's tested some 50 different flavor profiles, and did ethnographic research in "hipster market hubs" -- Austin, Texas, Portland, Ore., London and Washington, D.C., then middle-America cities like San Antonio, Des Moines, Iowa, Springfield, Ill. and Little Rock, Ark., per Charles Vila, VP, customer and consumer insights. "These are restless spirits with adventurous tastes," he said. "They grew up on sushi -- Mexican food, for example. It's not 'ethnic cuisine' to them."

The company is promoting the new sku entirely online, per Nelson Warley, senior brand manager. "This is a highly social audience," he said, explaining that the company partnered with music, humor sites, and gaming platforms. Campbell tapped BuzzFeed to develop custom Campbell's Go posts; with Funny or Die, including around Don Cheadle's "Captain Planet" series; and Spotify, where consumers can create custom playlists built off the persona of the soups (the other four soups are Coconut Curry with Chicken and Shiitake Mushrooms, Spicy Chorizo and Pulled Chicken with Black Beans, Golden Lentil with Madras Curry, Moroccan Style Chicken with Chickpeas); and with "Angry Birds: Star Wars." All programs involve a coupon offer to drive consumers to Campbell Go's Facebook and Tumblr pages.  Retailers are doing sampling programs at night, peak Millennial shopping hours.

Serrao said the company communicates to consumers on social media directly through the personality archetypes for each soup, which are featured on the soup pouches, and appear in humorous videos.