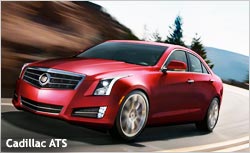 Jim Vurpillat, Cadillac's global marketing director, was at New York's Soho Grand hotel on Thursday, a lodging whose razor-thin concierges all have European accents and "Art and Science" (to borrow from Cadillac's nomenclature) haircuts.

It's the appropriate Cadillac locale partly because it matches to some extent what the luxury auto brand wants to align with: younger, urban, affluent people, a new cohort that the GM brand had no access to before now. Enter the ATS, Caddie's first real compact luxury car that is meant to serve as a gateway to the portfolio of cars and SUVs. Vurpillat was in New York for a low-key street art program via its media partnership with Vanity Fair.

The new car gives the brand some legitimacy around backing public art installations made by so-called street artists in places like the flank of the building across from BAM housing Mark Morris' dance company. Marketing Daily caught up with the marketer in Soho.

Q: Why is this art happening?

A: Well, our parameter for sponsorship is who will it reach and how can we engage the customer. We don't have a big presence, though -- that's not the point.

Q: You also launched the XTS full-sized sedan this summer. That would be for loyal customers coming out of the DTS and STS, right?

A: Loyalty and conquest aren't two static numbers; it's a flux: inflow versus outflow. Ideally, the two should match so the buyer base is refreshing itself. So we don't look at one metric like loyalty, or conquest. Also, every car we have has a different role in that.

A: So the ATS [which vies against cars like BMW 3-Series and Mercedes-Benz C-Class] competes in the largest segment in luxury -- compact luxury. It offers an opportunity because it's in flux; you have a flow of people leaving C-Class and A4 3-Series, so there's a real churn in that segment.

Q: What are the early numbers?

A: Early data on ATS is that in the first two months we have seen that 70% of buyers have never owned a Cadillac.

Q: Because of the hopefully younger buyer, are you doing more social media?

A: With a car like ATS -- a new nameplate in a new category for Cadillac -- you have to do a broad national campaign, but social and digital in general play a huge role. Take the Super Bowl spot this year, which was important, obviously -- but we ran it virally everywhere, including on social channels, and then that kicked off a whole series of "Journey" online videos about the development of the car.

Q: If there's a lot of churn, you can just as easily lose ATS owners to someone else. How do you prevent that?

A: First, we work our ass off to make sure we get them into the brand, and then we do everything we can to make sure they have a great experience. And experience is a big pillar for what Cadillac is focused. It has been nearly a decade since we haven't been in the top five of J.D. Power's Customer Satisfaction Index.

Q: Do you have a local/retail element to the ATS campaign?

A: We are kicking off a dealership program that lets people compare vehicles by driving [competitive] cars like the BMW 3-Series, or Audi A4.

Q: In which dealerships?

A: The large, metro, stand-alone stores will be all over it. And of our 948 dealers network about 250 are stand alone. And our volume is really driven by those stand-alone metro stores.