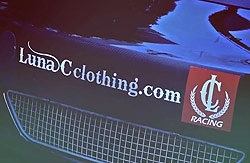 The automotive racing world is crowded with brands. NASCAR race cars are more packed with logos than Times Square. There are official timepieces, official tires, official pace cars, and official wireless networks. But one product line has reversed the equation. It's a brand that started in a racing crew pit and has motored its way into the general market.

Luna-C Clothing, which now backs BGB Motorsports for the Grand-Am Rolex GX series in Daytona and other major Grand-Am races, went on sale this year and is now in a range of high-end stores nationwide, and perhaps an iconic major chain soon. It started as an idea to solve pit crew demands for cool, dry, water-resistant and energy-supportive suits.

Lee Davis, CEO of the Johns Creek, Ga.-based company, says the theme line for the brand is "automobile influenced, technology infused and racing inspired." Davis, who races the team Porsche Cayman for the series, said that after a global search, the nascent brand tapped Switzerland-based Schoeller to build technology intended to deal with endemic pit and driver issues.

"When I started racing in the Grand-Am, I looked around for for the right crew clothes and couldn't find a thing. That was the genesis of the idea," he says, adding that the company had the ill fortune to launch in 2009 when the economy tanked, and thus waited it out and used to time to grab a global design team.

Davis said one Schoeller-developed technology that the 33-piece line uses is called ColdBlack. It imbues black attire with the same capacity to repel heat as white clothing, which is mandatory in sun-blasted race pits. The line also has carbon-fiber elements, and a spherical molecule technology that repels water.

The apparel for the general-market is obviously less purpose-driven, and more about design, but the brand's event-marketing program through store events brings in the race iconography with exercises like parking a team Cayman in front of high-end men's fashion stores where the brand is sold. The company is also running social media efforts, a series of YouTube videos about the brand and team racers, and plans advertising timed with next year's portfolio expansion.

Davis says that by exploiting buzz, the brand has expanded nationwide to a roster of men's stores and has enjoyed a hockey stick sales curve. "It has kind of been amazing, not only from sales perspective but from the perspective of vertical expansion." Several automakers have approached the company both for licensing deals and brand affinity programs aligned with sports cars and performance vehicles. "And other race teams are coming to us as well," he says.

Davis says the genesis and general-market growth of the line has an analogy in the movement of technology from the track to the streets. "You test innovations in racing and adapt them to cars."