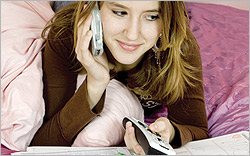 TV gets more total consumer use than all other media -- but fragmentation of those audiences and multitasking make those results less clear.

But multitasking makes it less of a easy victory for TV. "Consumers’ attention is more divided than ever as media multitasking becomes the norm," notes eMarketer. "Formerly linear consumption activity, defined by appointments with specific media, is now a tangle of simultaneous activities, some related, some not. TV remains at the center of this multitasking, but more often than not, there is another screen more directly in front of the viewer."