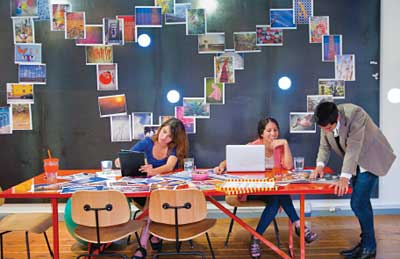 San Diego-based Covario’s commitment to clients results in increases in traffic, conversion rates and sales. But what really sets it apart?  Eclectic thinking

The elevator doors open to a white and orange Covario sign painted on the wall. It ties into the company's latest branding campaign sporting an image on its Web site home page of a white-haired Einstein with an orange streak, symbolizing intelligence with a twist.

A few steps into the reception area and the space takes on a high-tech, real-time agency feel: The open ceiling reveals the building’s plumbing, which Covario founder and CEO Russ Mann says represents the inner workings of the Internet. A short walk down the hallway and into his office reveals a standup desk and small round conference table with a few chairs. The Harvard Business School graduate is quick to weave similes and alternate meaning from words.

The name Covario comes from the “covariance” theory, a measure of how random variables change and relate to others. It reflects the company’s focus on paid and organic search, from desktop to mobile.

Mann once described the word — Covario — as the variability of two independent data streams. “It’s sort of like calculus, changing over time,” he says. “If you really want to geek out remember the Heisenberg Uncertainly Principal, which suggests light is both a partical and a wave, but you don’t know which until you look.”

Talk with Mann about the name change and he likens it to the Heisenberg principal, suggesting marketers can assess and understand the worth of a campaign, how it co-varies, but not both simultaneously. By 2008, that ideology had attracted $21.5 million in investments from Dubilier & Company, FT Capital, Voyager Capital and others.


The Proof’s In The Pudding

Covario, an independent standalone agency headquartered in San Diego, Calif., continues to evolve into a truly global search firm. About 79 percent of its customers have campaigns running worldwide. When asked about his role in driving up sales for clients, Mann points to employees and refers to it as a team effort.

Mann leads about 200 employees and another 40 partners in China and around the world. Overall, company experts and technology support more than 70 Fortune 500 and Internet 1000 advertisers, representing about 1,000 brands and Web sites, including ibm, Intel, Nikon, Sony Pictures, T-Mobile, Cabela’s, and Guthy-Renker from offices in Chicago, London, Beijing, Tokyo, Singapore, Toronto, and Sao Paulo.

The company generates about $100 million in gross billings, Mann says. Revenue grew 25 percent in 2012, while the advertising industry slowed to 6 percent; and search, 17 percent. The firm not only helps itself, but also clients. Guthy-Renker experienced a 259 percent rise in paid search conversions, and Samsung drew 4.4 million new Web site visitors.

Covario and Guthy-Renker worked closely to restructure and cut costs for the Proactiv paid search program. The campaign drove up Web site visits, adding incremental results beyond what television did. The non-brand campaigns yielded a 15 percent year-over-year increase in traffic, 213 percent increase in conversion rate and 42 percent drop in cost-per-order.

For Samsung, Covario created 4.4 million organic visitors since the campaign launch. Additionally, Samsung and Covario were able to increase total traffic by 43 percent and organic traffic by 227 percent during the holiday season. The company wanted to increase visibility in Google search results for brand and non-branded terms, and improve the experience for site visitors.

Among other strategies, Covario recommended adding 23 branded new sub-category pages that were included in the navigational structure of the site. The company created an evergreen Black Friday page to capture more generic holiday-specific traffic.

Samsung isn’t the only company seeing better results. In October 2011, SolarCity had trouble ranking well for non-branded terms, though they had adequate rankings for branded terms. The goal to drive additional Web site traffic, generate higher qualified leads, and become the proximate name on page one rankings for terms like “solar panels” led the company to work with Covario.

Proving results for its clients, Covario took the San Diego’s 2010 Ernst & Young Entrepreneur of the Year in the Emerging Business category. The company has also won numerous MediaPost OMMA awards, along with nods from Forrester and many industry publications.

This year, it launched a Creative Services team specializing in the design and multivariate testing of paid and seo campaign landing pages and micro-sites, which has experienced over 500 percent revenue growth.

The company’s philosophy continues to attract an eclectic and diverse group of executives. Most recently Claire Long, Covario CFO and COO, from the San Diego Union Tribune, where she was responsible for the publisher’s finance, accounting and treasury.

Diversity also led former iCrossing search experts Jeff Johnson, nascar aficionado and former amateur bull rider, and Mike Gullaksen to join Covario in 2009, becoming co-managing directors and senior VPs. Recently named among the Direct Marketing News “40 Under 40” group of the nation’s top young marketers, Gullaksen muscles up at the gym, keeps a flop-eared bunny at home, and serves on the Board of sempo.

The two started the agency group in Phoenix about four years ago and attracted folks like Chicago-based Matt Kropp, VP of domestic client strategies and solutions, an amateur comedian who trained with Second City TV.

Early in 2012, Covario spun out Rio SEO, a business unit focused on technology platforms. The name comes from “rio” in Covario or the “river of content” that supports “SEO” services through automation. Along with the name came an emerging vocabulary SEO Lo Mo So, or search engine optimization for local mobile social campaigns.

Rio seo focuses on seo, social and content marketing automation tools. About 40 percent of the retail traffic from the clients comes from mobile.