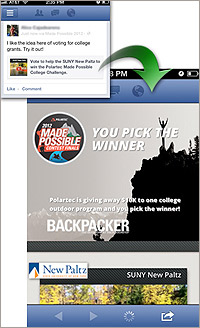 Facebook’s much-publicized effort to ramp up mobile advertising showed results in the third quarter, when it reported 14% of its $1.26 billion in revenue came from ads run on mobile devices. But that doesn’t mean campaigns always extend seamlessly to handheld devices.

The transition can be challenging when marketers run branded apps on their Facebook pages to help spur viral sharing, comments and other social actions. around a promotion or broader ad effort. Without optimizing for mobile screens, users may need to pinch and zoom the page to make it viewable or get stuck with a dead link.

In a blog post last month, Facebook ad partner and developer Friend2Friend highlighted glitches some of the largest brands have encountered translating Facebook apps to the mobile side. It pointed to the “What Can Your Coke Become” app on Coca-Cola’s Facebook page. Fans who clicked on contest videos were taken to a blank error page, according to friend2friend.

Similarly, Converse’s Rubber Tracks and “Warrior Remix Context” apps on its Facebook page generated updates in fans’ mobile news feeds that linked to sites requiring “significant pinching and zooming. Following a link from its own Timeline for the shoe brand’s “Rock Your School” app led to an error message.

Friend2Friend CEO Roger Katz suggests many brands have a lot of catching up to do to make their Facebook presence more mobile-friendly. “A third of [Facebook] users are trying to engage on these brand pages and in these branded apps on smartphones,” he said. “If a third of those experiences are failing, that’s a sorry state of mobile engagement.”

To help bridge the gap between the desktop and mobile, the company has released an upgraded version of its social marketing platform that includes tools for running campaigns across platforms. They include a self-serve system allowing brands to create mobile-optimized Web content and apps once on run simultaneously on PCs and mobile devices.

It also lets marketers combine social campaigns in a single, standalone app that can be promoted through various channels, including the Facebook news feed, email, Twitter and QR codes. The platform automatically builds a mobile-friendly “SmartLink” and accompanying printable QR code for driving traffic to brand executions built by Friend2Friend.

As a Facebook Preferred Marketing Developer, the company offers publishing, analytics and management tools. For clients Outside magazine, Build-Bear-Workshop, SmartWool and New Belgium Brewing, it has developed a mobile-optimized presence on Facebook.

About 60% of the social network’s 1 billion users are accessing it via mobile.

Friend2Friend says its social apps on Facebook mobile have increased 450% since the spring, while mobile “Likes” have increased 500% to client brand pages from mobile fans. But overall, “brands haven’t made the leap to taking the experiences they have in environments like Facebook and bringing them so they’re effectively presented in mobile,” said Katz.