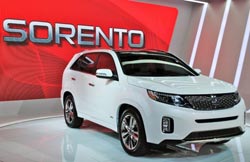 Partnerships announced Wednesday between Google and a growing number of automakers should demonstrate to marketing the need for more accurate online company data.

For KIA Motors, the integration will roll out with cars later this year in the 2014 Sorento CUV. The integration of Google platforms into Google Maps and Google Places will support driving directions and locate Points of Interest.

Google already works with other automakers. The Audi A7 offers Google Maps. Ford announced in 2010 that Sync-equipped vehicles would access Google Maps, despite its close ties with Microsoft. The real spark for businesses will come when other information, aside from basic local business location, becomes available for consumers through Google Maps and Google Places.

Integrating car systems with Maps and Places will make it more important for brands to maintain search directories. Andrew Shotland, founder of Local SEO Guide, suggests that marketers ensure data is up-to-date and available to services using local business listings. He said in-car navigation services, such as Garmin and TomTom, use both proprietary and licensed business listing data.

At a minimum, any local business should ensure that business data remains up to date on all of these systems, including the big business listing data suppliers: Neustar Localeze, InfoGroup, Acxiom, and Factual, according to Shotland.

Google and Bing have begun testing the integration of search with local product listings. Google is testing the feature with a limited number of retailers that advertise specific products. It should link to Maps and Places, enabling consumers to pinpoint inventory at physical locations.

While it's not clear whether automotive systems will become the next point of integration for ad targeting, when it comes to cross-device tracking, Jon Venverloh, head of platforms at Google Shopping, points to AdMob as a way to explain how Google looks at cross-device tracking. At the MediaPost Search Insider Summit, he said AdMob supports about 350 million devices, gets 3.5 billion ad requests daily, and 300,000 apps, with a revenue ad run rate of $8 billion for 2012.