Brits Vs. Yanks: Will We Ever Shop The Same? 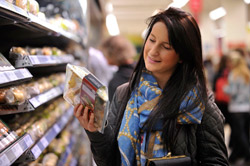 While Tesco’s debacle du jour is the horse meat that just turned up in its hamburgers in the U.K., retailing experts are still mulling the company’s announcement last month that it would bail out of the U.S. entirely, leaving behind its ill-fated Fresh & Easy.

It’s easy to see why Tesco thought Fresh & Easy, which it began opening in the U.S. in 2007, would be a slam-dunk. Smaller grocery stores, with plenty of fresh food and restaurant-quality prepared meals, were a big hit in the U.K. and elsewhere, catering to an increasingly sophisticated, chef-obsessed audience.

“And we are so alike,” Neil Stern, senior partner at the Chicago-based McMillanDoolittle, and an expert on global retail branding, tells Marketing Daily. “We look the same and speak the same language. We even watch 'Downton Abbey.' The food was fresher, and it was offering something better than what we have in the U.S.”

What happened, though, proves that George Bernard Shaw might have been a retail guru, even in the e-commerce age: Americans and Brits are still more or less two peeps, divided by a common language.

The freshly prepared meals are so popular in the U.K. because they are seen as an alternative to restaurants, he says, while they struck Americans (who are accustomed to frozen foods) as an alternative to frozen dinners. “People didn’t know what to make of it,” he says. “The stores had hundreds of just amazing products, but Americans didn’t read it that way.”

“Tesco really misjudged how Americans shop, and things like wrapped produce and foods that are discounted by freshness date didn’t appeal to them,” adds Bryan Roberts, the London-based director of retail research at Kantar Retail.

Of course, American retail brands often fail elsewhere too. “Everyone had such great hopes for Best Buy,” he says, “and while clearly much of that brand’s results in England are attributable to bad timing, it also made a massive strategic mistake, giving Dixons, its biggest competitor, two years notice.”

And some categories are inherently challenged: Big-box home stores, for example,  “wouldn’t translate well because of very different living arrangements and property ownership.”

And some differences reach beyond categories. For one thing, outside major cities, Americans drive everywhere, making the question of what’s convenient very different than in the U.K., where many shoppers are riding buses down to the high street.

And there are interpersonal factors, as well. “American shoppers are much more approachable,” he says, “so salespeople are quite interactive. It is quite unsettling, and the British are more reticent. U.K. shoppers also seem more mission-oriented.”

Fashion is the most exportable, Roberts says, and Topshop (as well as Topman), owned by Arcadia Group in the U.K., seems to be an early winner in translating British style for young American shoppers. For one thing, says Roberts, it’s an aspirational brand, and its global cheap-chic competitors are already here, including H&M, a Swedish company; Zara, based in Spain, and more recently, Uniqlo, owned by a Japanese group.

Interestingly, however, is that Topshop has partnered with American retailer Nordstrom, opening 4,000-square-foot Topshop boutiques in 14 of its stores and “offering a warm British welcome” to those new to the brand.

Meanwhile, Tesco, scrambling to explain to its British fans how Seabiscuit ended up in the meat case, won’t likely be in a hurry to take on American shoppers any time soon. “America’s been the biggest blot on its copybook,” Roberts says.  But while Tesco may take a few years to lick their wounds, it won’t be long until another global retailer makes an effort to enter the U.S. “This is the largest retail market in the world,” Stern says, “So yes, it’s still pretty attractive.”

europe, retail, supermarket, uk
1 comment about "Brits Vs. Yanks: Will We Ever Shop The Same?".
Check to receive email when comments are posted.
Next story loading