Watch Out For That Kid: Belgium Toyota Campaign Urges Safety When Backing Up

Drivers can be easily distracted by the likes of their car radio, technology -- texting or talking -- not to mention other drivers.

Safety issues also increase when cars are in reverse. According to KidsAndCars.org, two children are killed and close to 50 are injured weekly in accidents involving reversing cars.

Happiness Brussels created a 3D road safety campaign for Toyota to raise awareness about children being hit by cars that are backing up. “Protect what’s behind you” features six lifelike, 3D images of children playing hopscotch, sitting in a supermarket carriage, drawing chalk pictures on pavement and riding a tricycle. 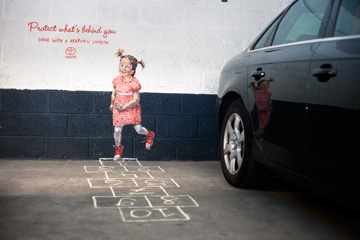 Next to each drawing was the tag line: “Protect what’s behind you. Drive with a rearview camera. Toyota."

"Toyota is the only brand that offers rearview cameras as ‘standard’ on all cars,” said Karen Corrigan, CEO of Happiness. “Even though they are not alone to have the cameras, they are alone to ‘democratize’ them.”

The goal of the campaign is to “generate awareness of the potential dangers of car reversing and that the use of a simple rear view camera can save lives or injuries,” continued Corrigan. “In the future we envisage a time when rear-view cameras will be standard on all makes of cars around the globe, and referring to it will be an automatic action in our driving experiences.”