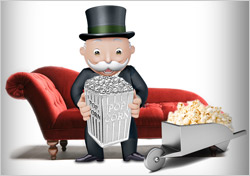 When the makers of Jolly Time popcorn (a family-owned brand that’s been around slightly longer than Monopoly) found out Hasbro would be retiring one of the famed playing pieces in honor of something new, they (and their agency, Haberman in Minneapolis) stepped up a social media and public relations campaign to get a piece representing the snack in the running as a replacement.

“Why shouldn’t there be a popcorn piece? It’s played with popcorn by your side,” Nathan Rice, digital director and partner at Haberman, tells Marketing Daily. “We think it makes perfectly good sense because there is an association between popcorn and games that goes way back.”

The effort began with a letter from Jolly Time CEO Garry Smith to Hasbro President and CEO Brian Goldner, noting popcorn and Monopoly have gone hand-in-hand with game night for generations. “Game night without Jolly Time Pop Corn is criminal—and you should go directly to jail for this callous mistake. Do not pass GO. Do not collect $200,” Smith wrote in his letter, before going on to cite problems with the current pieces under consideration: cat (allergies), helicopter (war connotations), robot (inability to love), guitar (on-stage tantrums) and ring (materialism, though given the game is about accumulating wealth and property, it’s unclear how that’s a detriment).

After sending the letter to Hasbro, the company and agency took the effort to social media, establishing an online petition to try to convince the company to add popcorn as a late piece entry. Blogger outreach conducted by Haberman generated more response. The effort worked: the petition garnered nearly 5,000 signatures, the brand added nearly 1,500 new fans in a short period of time, and conversation around the topic spiked. Plus, they got Hasbro’s attention.

“Hey, Jolly Time Popcorn, while we love your petition, we love popcorn even more. We eat it by the wheelbarrow full,” read a message on the game’s Facebook page. The company also created an image of Rich Uncle Pennybags, Monopoly’s signature character, holding a popcorn box next to a wheelbarrow full of popcorn.

“Hasbro picked up and responded in a nice way,” Rice says. “We still think there might be something coming from them. They sent the initial image. Then, they alluded to something else. We don’t think they’re done, but we don’t really know.”

Regardless, the campaign has worked as a buzz-building opportunity, which helped the 98-year-old company remain relevant in the social media age. “Our goal was to generate some attraction and make the connection between family game night and fun with Jolly Time,” Rice says. “The important part for us is the buzz we’re getting and being part of the conversation.”