2013 has already been an eventful year for Subway.

Yesterday’s Super Bowl saw its first in-game ad spots since 2005. One, celebrating the 15th anniversary of longtime spokesperson Jared Fogle’s weight loss, ran in Q2. A second, which had been kept under wraps prior to the game (touting its month-long “FebruANY” Footlongs promotions), ran early in Q3 -- and then a second time, due to that quarter’s unprecedented power-outage event.

In addition, Subway has again been ranked #1 by consumers in the just-finalized 2013 Brand Keys Customer Loyalty Engagement Index. This time, it’s alone in the #1 spot, whereas it tied with McDonald’s for #1 last year.

Last week, Subway was also ranked the best-perceived QSR in the U.S., for the third year in a row, in YouGov BrandIndex’s 2012 QSR Buzz Rankings.

All of which would seem to go a long way in helping to take the edge off the Footlong consistency-of-length controversy that broke out in mid-January. (YouGov BrandIndex reported that Subway’s Buzz scores dipped in mid-January, but were actually up by 20 points among frequent customers by late January.) 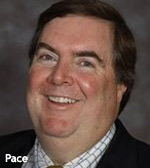 On Saturday, Tony Pace, global CMO and SVP of the Subway Franchisee Advertising Fund Trust, took a time out to talk with Marketing Daily about the Fogle anniversary Super Bowl ad and provide a partial peek at the QSR’s 2013 strategy. (Pace spoke prior to the reveal of the “FebruANY” ad – and obviously, prior to the unexpected power-outage scenario.)

Back In the Game

Like most Subway ads and promotions in recent years, both Subway Super Bowl spots featured athletes who are Subway fans – in the case of the first spot, congratulating Fogle on having kept his weight off for so long, “despite the odds.” The overt sell message is limited to a brief mention of Subway Fresh Fit Meals at the end of the spot.

Why opt to be in 2013’s Bowl after an eight-year absence?

The answer comes down to audience reach and strategic timing, according to Pace.

For context, he notes that Subway has continued significant investments in advertising and promotions around the Super Bowl every year, including two 15-second spots aired during 2011’s pre-game show (an opportunistic buy, Pace says). Further, Subway has been extremely visible in the NFL, including spots featuring its NFL-star fans that aired during many of the 2012 games and the playoffs.

“Obviously, the Super Bowl, but also the NFL games in general, have continued to be the exceptions to the ongoing trend in audience fragmentation,” Pace says, noting that NFL games accounted for 31 of the 32 most-watched TV shows last fall.

Subway had been mulling a 2013 return to the Super Bowl for about two years, he reports. “If you’re going to be in the Super Bowl, you’re going to want to make the most of that by debuting new creative – but that doesn’t always mesh with [a brand’s promotional] calendar or what’s happening at the time,” he says.

Since Subway’s marketing success has in no small part been based on long-term consistency in creative and platforms, any Super Bowl ad would also need to be consistent with its brand messaging and approach, yet “crank it up to another level,” Pace explains. “We knew we needed to do something that would genuinely build on the brand. We weren’t going to do something crazy and out-of-character with the brand just to get people’s attention.”

The 15th anniversary of Fogle’s weight-loss presented the right opportunity at the right time. It enabled an approach that’s entertaining but “true to who we are,” and “doesn’t involve animals and children,” says Pace, alluding to the tried-and-true elements of many Super Bowl commercials.

The spot, he says, was designed to provide a “big-production” feel: Baumgartner sets the stage for Fogle’s “great feel-good story,” followed by a dramatic summary of that story conveyed through the athlete clips.

Subway is of course expecting to realize major buzz benefits from postings by the spot’s stars on their own social media networks, as well as viewers’ discussions of the ad on Subway’s and other social channels.

Capturing greater share of family restaurant spending will be one continuing marketing emphasis for Subway in 2013.

Subway made substantial progress on this last year through promotions around Disney and Pixar movies including “Brave,” Frankenweenie” and “Wreck-It Ralph,” according to Pace. “Those were very successful in driving business for us,” he says.

Not surprising, then, that Pace reports that 2013’s marketing plan includes tie-ins with at least three family films: “Iron Man 3,” “The Lone Ranger” and “Monsters University.”