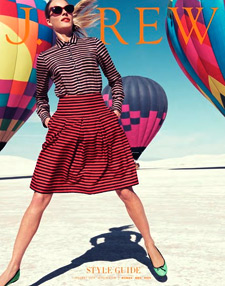 Editor's Note: This week, Marketing Daily brings you exclusive coverage of the Brand Keys 2013 Customer Loyalty Engagement Index. Each day, expect a full report on key product/services categories from among the 54 surveyed for this year’s study, including automotive, electronics, retail and technology. This installment focuses on highlights from retailers.

For retailers, the path to consumer loyalty has never been as puzzling. As consumers increasingly pursue multichannel shopping, there are more platforms to delight them, but so many more ways to turn them off. And as the results of the new 2013 Brand Keys Customer Loyalty Engagement Index (CLEI), now in its 17th year, shows, it takes careful devotion to brand identity to keep people coming back -- whether it’s to shop online or in stores, whether they are surfing your site from Aisle 2 or shopping by tablet in the car.

In clothing, J. Crew lands in the top spot. “Thank you, Mrs. Obama,” quips Robert Passikoff, Brand Keys’ founder and president. “This is a brand that knows how to stay stylish and affordable, and really means something to shoppers.”

The same branding magic held true for the Gap, which moved into the fifth spot among all clothing stores. “The Gap was in a death spiral, and it had been forever. But in going back to its roots with denim, it’s managed to get some of the buzz back. It’s moved beyond chinos and black shirts, and up from the very bottom.”

By contrast, he says, Gap’s Old Navy division does well on affordability and value, “but no one is talking about it. It’s cheap and it’s there, but the shopping experience is just average.”

Kohl’s came in as the top-ranked department store, followed by Macy’s and Marshalls. Not so surprisingly, struggling JC Penney, which recently announced that it would go back to having regular sales, came in dead last. “What else can they do wrong? It’s a brand that has lost all resonance and viability,” he groans. “The reputation is terrible.”

And while overall, digital experiences are increasingly important in cementing the bonds between store and shopper, “there is still the larger sense that the online experience is just our electronic cash register,” he says. “When you go to Macy’s flagship in Herald Square, you understand why it’s a tourist mecca. But online? You click on the site and just see … inventory. Merchandise.”

Online retailers, on the other hand, “understand the psyche of the digital experience, in a way others don’t. And Amazon, ranked No. 1, is the juggernaut.”

Among all categories, “it’s getting harder and harder to build loyalty,” he says. “But brand power is an important measure of competitive advantage. Companies that can leverage a brand always profit from long-lasting customer loyalty that drives sales.”

For the first time, Brand Keys ranked sporting goods stores, with Dick’s coming in first, followed by Sports Authority and Cabela’s. “Dick’s won, even though its measure for shopping experience is a little flat,” he says. “But it wins in location. Its stores are convenient, the assortment is good and there is always something on sale. That’s important to people.”

By an all-male ranking, Cabela’s scores much higher “It’s a guy’s store, and a great shopping experience, filled with bows and arrows and gunpowder. It’s the modern-day equivalent of Abercrombie & Fitch, back when it was an outfitter. Those shopping experiences stay with people.”