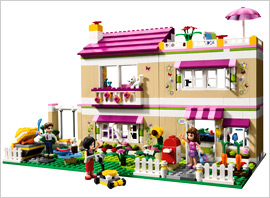 Of the more than 150,000 new toys debuting at this week’s Toy Fair, industry trendspotters say they are seeing plenty of retro inspiration, as well as 360-degree playthings that allow kids to surf through virtual worlds, and a resurgence in construction sets.

And the Lego Group is already emerging as a big winner, with its Lego Friends, a construction set aimed primarily at girls, taking home honors as the Top Toy of 2012. (It also won for the top girl toy of the year.)

But the toy industry is anything but child’s play these days, between economic concerns, cautious consumers and a declining birthrate. The NPD Group says that despite a late December surge in toy buying, U.S. retail toy sales totaled $16.5 billion, a slight decline from the $16.6 billion recorded in 2011. The best-performing categories were building sets, arts & crafts, dolls and infant/preschool. The biggest decliners? Stuffed animals, outdoors and sports toys, vehicles, games and puzzles.

Innovation could change that, and the Toy Industry Association says its annual trade show is its biggest ever. Now in its 110th year, the TIA expects it to draw more than 33,000 toy insiders, including 20,000 retailers, with over 1,000 toy companies exhibiting. The TIA says other major trends, which will be reflected in what kids will clamor for next holiday season, include plenty of pop culture influences, especially DIY toys inspired by reality TV shows.

Tech twists are everywhere, such as Barbie’s Digital Makeover Mirror, which uses facial tracking to change an iPad into a mirror, letting girls dabble in eye shadow, lipstick, and glitter onscreen. Hasbro, unveiling its new Beast Hunters, the latest in its Transformers brand, says the creatures come to life across programming, digital games, and publishing.

Toy behemoth Mattel is also relaunching action hero Max Steel for the tween boy audience, and serving up a big push behind Barbie. This year, the middle-age fashion doll has put her Malibu Dreamhouse on the market for $25 million and is currently house-hunting, an effort that includes online engagement as well as retail touchpoints.