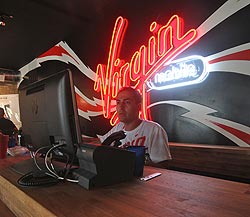 Valentine’s Day may be a holiday about love and commitment, but there have to be at least a few people who are questioning their relationships around the holiday. Virgin Mobile is looking to speak to those people.

The pre-paid mobile carrier has marked Feb. 13 as “National Break Up Day,” encouraging people who are in unhealthy relationships (particularly if those relationships involve a mobile carrier) to get out of them before spending money on something that won’t last.

“There’s so much talk [around Valentine’s Day] about love and relationships, and we think there are a lot of people being left out,” Ron Faris, head of brand marketing for Virgin Mobile USA, tells Marketing Daily. “Not just those who are single, but also those who are looking to get out of a relationship.”

To back its cause, Virgin Mobile commissioned a survey that found 59% of the respondents said if they were planning to break up with someone around Valentine’s Day, they would do it before the holiday to save money. Forty-two percent of people surveyed said they have stayed in dead-end relationships because they were afraid to try something new.

As part of its promo, Virgin Mobile is offering to pay up to $100 off the purchase of a new Samsung Galaxy SII 4G (with a Beyond Talk no-contract plan) on “National Break-Up Day.” The company is promoting its offer through social media channels (Facebook, Twitter and BuzzFeed), and with a video depicting “30 breakups in 60 seconds”

Virgin Mobile is also turning over its Twitter feed on Wednesday night to the folks behind dating site OKCupid, who will help people either just out of a relationship or looking for love punch up their profiles to make them more enticing, Faris says.

The one-day promotion is not likely to be the brand’s last around a holiday or other event, Faris says. “One of our big initiatives is for you to get a whole lot more value from us than from the big [postpaid] carriers,” he says. “I think you’ll be seeing some more moments where we’ll be selling [the idea of] ‘break free’ in different ways.”