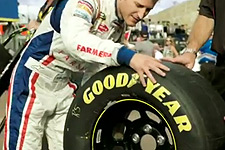 Goodyear raced into Daytona Beach, Fla., last weekend for the Daytona 500, where it launched a marketing campaign kicking off a new five-year partnership with NASCAR. The Akron, Ohio-based tire giant, which last year concluded a five-year Official Tire deal with the organization, had new ads on the Fox broadcast of the race, experiential elements on the ground at Daytona International Speedway, its iconic blimp in the air, and its race-ready tires on all the cars.

Goodyear's campaign -- via Austin, Texas-based GSD&M Idea City and Boston-based Digitas -- makes the demands of NASCAR’s bruising race environment a halo for the tire brand by exploiting the fact that all NASCAR race cars have to be shoed in Goodyear tires, as part of the partnership.

The creative, with a "Battle Tested, Road Ready" theme, weaves high-octane race footage (with ample shots of Goodyear tires on zooming cars) with that of Goodyear engineers and craftsmen building, testing, and honing NASCAR-spec race tires. The basic message is that what Goodyear makes for racers inspires what it makes for consumers. Goodyear will also have brand visibility all over the venue and during the broadcast with things like animated Goodyear blimps on-screen carrying a “More Driven” message. Print will be in racing pubs and properties like ESPN Magazine, USA Today and Sports Illustrated.

Its relationship with the organization also gives Goodyear pole position in NASCAR's Sprint Cup Series, the Nationwide Truck Series and Camping World Truck Series. The company will use those races to tout its Assurance, Eagle and Wrangler tire brands, per Gary Melliere, Goodyear's general manager of brand and sponsorships.

Melliere tells Marketing Daily that the partnership is a bonanza for the company because NASCAR is the second-most-popular sport in the U.S. (it has about 75 million fans), and because there is a strong consumer correlation between NASCAR and Goodyear. The Daytona 500 broadcast itself gets about 20 million tune-ins, notes the company.

"People are only in market for a short time for tires, so perception is very important," he says, adding that a third of Goodyear buyers are also NASCAR fans, and that those consumers not only have high brand loyalty but also tend to be strong brand advocates. "We want to make sure consumers understand the critical role that tires play in races, and what our tires are subjected to," he says, adding that the bottom line is being top of mind at retail. "We want them to think Goodyear first."

On the ground, Goodyear will have product displays on race midways, including a "torture test" that demonstrates what a tire goes through during a race and how that informs the consumer product development, and a gigantic version of Plinko, where a Goodyear racing tire is the chip. And of course, the Goodyear Blimp will be overhead. "The blimp is a great branding tool,” says Melliere. “We actually own it [rather than renting it], it's always in huge media markets like Los Angeles, Miami, New York and Atlanta and big events like the London Olympics. There isn't a better brand icon. It's there to help us sell tires, because it creates an emotional connection with the brand."