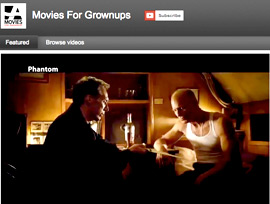 In its ongoing efforts to create engaging original content online for the 50-plus audience, AARP is launching a series on YouTube called “Movies for Grownups.”

The series is an expansion of the TV show, which is already currently on RLTV. Viewers can subscribe to the “Movies for Grownups” YouTube series for free.

The series features the program’s founder and AARP’s film expert, Bill Newcott. During each weekly episode, Newcott will discuss what’s new in theaters and on Video on Demand (VOD) home entertainment releases.

“Movies for Grownups has gained immense popularity over the years and has grown from a magazine feature into a multiplatform offering, reaching people through radio, TV, online and beyond,” said Larry Gannon, AARP vice president of TV and radio programming in a release. “The Movies for Grownups YouTube channel will serve as a beacon for the film world on providing insight into the latest releases that matter most to the grownup audience.”

The 12-year-old program has showcased films that appeal to an older audience, beginning with articles in “AARP The Magazine.”  It has grown each year with film reviews and blogs on www.aarp.org, an award-winning radio show and its annual Movies for Grownups Awards gala in Hollywood.

In addition to weekly episodes led by Newcott, the new channel will also see contributions from the AARP magazine’s West Coast Editor Meg Grant. Videos will post on Thursdays, timed so that subscribers can make their movie picks for the weekend.

Viewers can subscribe to the “Movies for Grownups” YouTube series for free and the first episode is already available and  covers films including “Jack the Giant Slayer,” “21 and Over,” “The Last Exorcism Part 2,” “Phantom,” “The Master” and “A Place at the Table.”