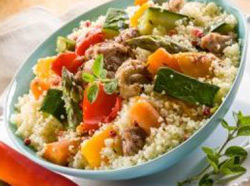 Young U.S. adults and households with children are key drivers of in-home-prepared ethnic foods, according to new research from Mintel.

About nine in 10 Americans 25 to 34 years old report having prepared ethnic foods at home in the past month, versus 68% of those 65 and older, Mintel reports.

In addition, 91% of Americans with children under the age of 18 report having cooked ethnic food at home in the past month, compared with 78% of those without children.

Hispanic food is also the most popular with all home cooks: 58% report having prepared such fare within the last month, versus 55% and 44% having prepared Italian or Asian fare, respectively.

Category growth has slowed quite a bit in the last three years: Sales grew 4.5% between 2010 and 2012 (reaching total estimated U.S. sales of $8.7 billion in 2012). Again, this likely reflects restaurant trends – in this case, a return to more out-of-home dining as the economy has continued its recovery.

“When it comes to ethnic food eaten and prepared at home, restaurants continue to pose a threat because of constant innovation that attracts consumers,” observes Mintel food analyst Carla Dobre-Chastain. “To remain competitive, companies need to focus on product development that blends authenticity with familiarity, while offering unique flavor combinations. In addition, providing consumers with the ability to customize their dish and emphasizing functional benefits could prove to be lucrative strategies.”

However, restaurant trends may have helped the category in at least one respect. “The popularity of Hispanic food is likely due to how mainstream it has become in the U.S. and the ease and convenience of preparing it,” says Frank, but in addition, “the endless supply of Mexican, Cuban and other Hispanic-based restaurants have given home cooks infinite possibilities for re-creating these restaurant-style meals at home.”

Moreover, Mintel forecasts that high growth rates for the prepared-at-home ethnic food market will resume, growing by 20.3% between 2012 and 2017.

Mintel stresses that much depends on product innovation that meets consumer needs. That balance of authenticity and familiarity noted by Dobre-Chastain comes into play in developing a range of products that appeal both to fast-growing multicultural groups and the growing number of consumers interested in exploring new cuisines and unique and traditional flavors.