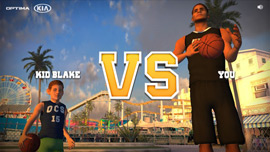 Kia has crossed the court a few times with NBA All-Star Blake Griffin, using him to hilarious effect in campaigns by AOR David & Goliath. First, he was in a mid-court, mid-game stunt where he dunked over the hood of an Optima sedan.

Then the sedan attempting to dunk over him (elaborated in a series of "Funny or Die" shorts where the role of the theoretical physicist is played by -- who else -- Jeff Goldblum, and Griffin ends up in traction.)

Most recently there have been a series of ads focused on the UVO infotainment system, which lets Griffin take his Optima back in time so he can castigate his younger self. There are five of those, some running right now during March Madness.

Now there's the "Take on Blake Dunk Challenge" 3-D Facebook game, which takes the time-travel conceit interactive. People can compete with four Blake Griffins of different ages, each representing an echelon of difficulty.

TakeOnBlakeSweepstakes.com dangles NBA prizes including trips to the NBA Finals or NBA Draft presented by State Farm, and a grand prize: a trip for two to LA for a personal meet-and-greet with Griffin. Top prizes are unlocked as more people play the game, providing a compelling incentive for social media sharing.

The campaign speaks to Kia's strategy of using partnerships like the one it has with the NBA (official vehicle) both to tout products and to build brand awareness. Michael Sprague -- VP marketing, who was in New York for the auto show this week -- tells Marketing Daily that awareness in the U.S. is indeed an ongoing challenge for the Korean brand. "We continue to grow, and build awareness, but we want to be on par with the Japanese competitors, but we have only been here for 18 years." He says, however, that there's not a lot of time on Kia's dance card these days to create some kind of national brand-personality campaign.

And maybe that's not such a bad thing. "We have been in launch mode this year, with seven new or redesigned products. But each of our vehicles is targeted to very distinct customer so we try to focus on communicating to them. There are very different messages to highlight for the Soul [compact crossover] versus the Sorento [SUV]."

He says that while the awareness conversation always comes up in the context of building awareness and familiarity for the brand, "It always comes back to the tradeoffs: we have to launch this car first and then we'll go back and worry about that.”

Meanwhile, sports and entertainment properties do just fine as awareness flagpoles for the brand, per Sprague. Kia has a big stage on NBC's "The Voice" where most recently it is promoting the Sorento.

As both the Time Machine creative and the Super Bowl "Where do babies come from" ad suggests, Kia is also not doing stand-alone creative for the UVO e-services system. "It's really integrated into our launch campaigns.”