Chevrolet Wears A Tux For Impala 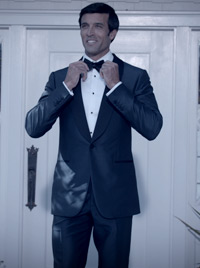 Chevrolet is launching a campaign for the 2014 Chevrolet Impala beginning this Sunday with the start of the 2013 Major League Baseball season. It is also the first vehicle-specific campaign under the new “Find New Roads” global marketing umbrella.

The new spot will debut on MLB Network, ESPN, Fox Sports and TBS. Called “Tuxedo Man,” the ad features a debonair family guy in the formal rags doing up the town after handing his wife a just-picked rose. The ad has a Brat Pack zeitgeist, complete with a toned-down Technicolor look, and "Fly Me to the Moon" sung by the Chairman of the Board as soundtrack.

Starting Sunday, if you go to chevybaseball.com, you can see a series of vignettes called “Here’s to the Craft of Baseball” -- profiling the behind-the-scenes artisans who "turn blocks of white ash into bats, stitch leather hides into gloves and keep ballfields perfectly groomed day after day." The automaker is also dangling an all-expenses-paid trip for four in July to New York City, site of the 2013 MLB All-Star Game, and an all-new Impala.

The “Find New Roads” campaign, applied to 140 or so markets around the world, was developed by Commonwealth, Chevy’s conning tower for global advertising, which started as a two-hander between rivals Omnicom and Interpublic. Goodby, Silverstein and Partners (Omnicom) is gone; McCann Worldgroup (Interpublic) is at the helm.

The tux guy made a brief appearance in the anthem spot showing several vehicles, wherein a little girl sits in the back of a Chevrolet Volt with an iPad and enters a fantasy world featuring different Chevy cars in worlds that reflect how Chevrolet is positioning each one (The Chevy Spark subcompact, for example, is a kind of automotive skateboard).

Alan Batey, interim marketing chief, tells Marketing Daily that Chevrolet withheld that launch spot from the Super Bowl -- which is out of character for the automaker -- partly because of the cost. "The anthem spot was our kickoff, but it was just too early for us to spend that amount of money."  Prior head of marketing Joel Ewanick had made the decision not to buy into the Super Bowl -- saying it was a big cost for sketchy ROI, but also because he liked the huge global presence offered by a (pricey) deal with world-famous soccer team Manchester United.

Batey says that even without the Super Bowl, the “Find New Roads” anthem, which has heavy placement on YouTube pre-roll, has gotten something like 10 million views. "We are working on two levels: the 'heart' work, which is the brand work; and then the ingenuity ads that show the technology we have in vehicles."

As for the global play with the Red Devils, Chevrolet will get its logo on Manchester jerseys -- just not quite yet, per Batey. "We're not on the shirts this season, but we will be as of 2014-2015. At the moment we're the automotive partner, so we're working with them, but AON is on the shirts." He says that, at the moment, Chevrolet is testing marketing tactics, including grassroots initiatives. "We're still experimenting, but we're finding our way through it. It's huge. It's not so big in the U.S., but we have 100% unaided awareness here. But in the growth markets like China we need to build the brand, and with soccer and Manchester United it doesn't get any better than that.”