Wyburn made a name for himself in 2011 when his portraits of celebrities, made from toast, coffee, sugar, chocolate and toothpaste, gained in popularity. His most popular piece was a portrait of Rupert Murdoch, made from newspaper images of alleged victims of the phone hacking scandal. 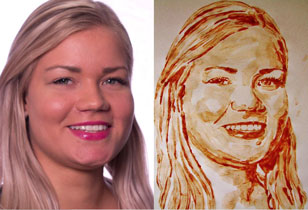 From March 14 to 21, Wyburn set up shop in a pop-up studio – seriously, a glass box -- in Helsinki’s Narinkkatori Square, where he painted portraits of passersby with Felix Ketchup. Wyburn also painted pictures of ten lucky Felix Facebook fans each day the shop was up.

Once a portrait was complete, a time-lapsed video of the painting being drawn was uploaded to the subject’s Facebook page. See an example here.