Facebook Builds A Mobile Ad Network Supported By Its Own Phone 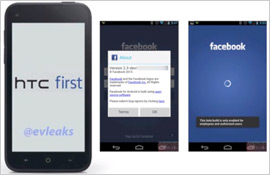 Expect Facebook to announce its mobile phone Thursday, according to Analysys Mason's Principal Analysts Ronan de Renesse and Stephen Sale, who published a research note Wednesday pointing to Android as "Facebook's most important mobile playground." The HTC phone will have a custom version of Android, according to reports.

While I have yet to believe a Facebook phone will catch on and not become one of the big hardware flops of 2013, analysts at Analysys Mason believe Facebook can do it, but needs to become more "native to grow consumer engagement," since two-thirds of daily smartphone use relies on pre-installed applications before its purchase.

Analysys Mason analysts believe Facebook could increase its app daily use sixfold if it were to become the default communication platform for telephone, messaging and email. The social network's messaging features are used by 14% of smartphone users. Total IP messaging penetration of smartphones is 34% -- giving Facebook a 42% market share compared with Skype and WhatsApp, according to the analyst firm.

But would you give up your iPhone or Google-focused phone for one designed and marketed by Facebook? Think of the data and the network. Facebook wants to build on the mobile Web what Google built on the desktop to dominate mobile advertising, surpassing Google.

Facebook, in my opinion, will build a proprietary mobile ad network, but I'm a little surprised that we hear nothing about Windows or help from Microsoft. While the headline on today's SearchBlog is purely my conjecture, there's no denying eMarketer's forecasts that Facebook will grab 13.2% mobile ad revenue share this year -- up from 9.5% in 2012. In the mobile display market this year, eMarketer estimates that Facebook will grab nearly three in 10 dollars.

Time spent per mobile unique visitor is now more than 2x that of desktop, so Facebook's share of mobile minutes should double from 11% in March 12 to 22% in June 2013, while competing services have risen from 1.3% to 4.5%, according to J.P. Morgan.

While sentiment on Facebook remains weak, J.P. Morgan believes it remains early in social advertising, as more marketing budgets are allocated to social, the new News Feed should improve the user experience while also attracting more advertising through bigger formats like video.

So would you dump your current mobile phone for one from Facebook? Kenshoo CMO Aaron Goldman said "yes, so I could understand implications for marketing," But he wouldn't dump his iPhone. Neither would I.