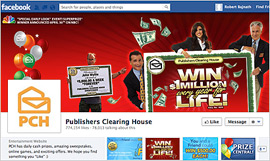 Publishers Clearing House has revamped its Facebook Superfan program, adding video and other features to make it more social and interactive to encourage sharing. As more people become PCH Superfans, higher prize amounts are unlocked to increase the winnings.

PCH faces an interesting challenge. Often people think sharing information about a sweepstakes notification decreases their chance of winning. The company set out to change that perception. Now, when one Superfan wins a prize of more than $10,000, another five win $1,000 each.

Kenn Gold, director of content development at PCH, said its more than 770,000 Facebook Fans are nice, but engagement has become more important. "We average about 15% engagement daily," he said, adding that there are about 350,000 Superfans. "We're probably interacting with about 300,000 Fans across our Facebook pages daily."

Facebook's deeper move into mobile should make it easier for brands like PCH to interact with Fans. Gold said about one-third of the interaction with its Facebook page goes through mobile. Gold said that this year, PCH will enable all new social programs to run on mobile.

PCH, which is nearly 60 years old, sees between 10 million and 15 million American consumers enter one of their sweepstakes monthly. While some of them have prizes of $1 million or above, many are $1,000, $10,000, $25,000 or $50,000. Advertising, sponsorships and merchandise allow the privately held company to give away millions yearly.

Because PCH changed the program, the company will measure success by projecting growth based on today's trends. In the first month since the program launched, the company continues to add about 1,000 Superfans daily, compared with 300 Fans daily previously. Chock it up to the "new car excitement," Gold said, although he expects that growth long-term will double that of the old program. "If no one interacts with your content, it doesn't matter how many fans you have."

PCH supports video on a branded YouTube page, and recently launched a video tab on its Facebook page to highlight recent winners. The video shows the diversity of winners, Gold said.