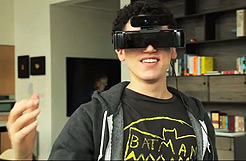 Epson Moverio, an established hardware and software company, wants to build out its Android app network with support from developers, as well as ad agencies Omnicom, WPP Group, Publicis, Havas, and Dentsu. Its eye is on the future: see-through, wearable 3D display glasses.

The company believes there's a future in Internet-connected glasses, similar to what Google designed. Epson, a leader in projectors and printers, launched its first version -- BT-100 -- last year. Google said it will not have its first version ready for consumers until 2014.

Today, the BT-100 device with WiFi connectivity and smart navigation makes images pop in the real world through augmented reality. It requires a touch-panel remote running on the Android platform, but Eric Mizufuka, product manager of new markets at Epson Moverio, said the company is working on version two.

Google did something similar. It teamed up with Silicon Valley VC firms Andreessen Horowitz and Kleiner Perkins to launch the Glass Collective, a program that seed funds startups developing hardware and software that works with Google Glass.

Until now, most of Epson BT-100 applications have been geared toward business and manufacturing, such as assisted training and maintenance, warehouse and logistics, but a video uploaded to YouTube describes the glasses capabilities for consumers and what the next version will look like.

While Mizufuka confirmed the company wants to "miniaturize the platform" and work with ad agencies on concepts and technology refinements, he declined to disclose the launch date for the next version of glasses. "We worked with the Buddy Group, which developed a cool concept video on possible applications," he said. "We brainstormed with them about the potential use cases to sell the dream to developers."

Epson will also look toward application developers and hackers to work on some "cool ideas," which is why the company launched an IEEE contest with engineering students to post a video on YouTube pitching a next-generation application idea for the Moverio BT-100.

Judges will select a winner based on creativity, novelty, practical use and implementation and benefit to humanity. Epson will award more than $16,000 in scholarship money and prizes. Epson will accept entries through April 30.