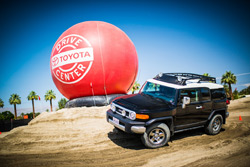 Automakers like music events and tours. Among them Hyundai had a big presence at Coachella last year. Kia backs the Vans Warped Tour. Honda has its own road show, Civic Tour. Pickup trucks back just about every country and Texas event you can think of. But few use the stage to unveil a new vehicle. Usually that happens at an auto show. Revealing a new model at a big concert, however, has its benefits: a lot of affinity marketing opportunities, and no other auto brands in sight (if you have exclusivity).

Toyota is doing just that via its sponsorship of the 2013 Stagecoach Music Festival from April 26-28, where the Indio, Calif., country music event will serve as the launch pad for Toyota's 2013 4Runner crossover. The event is, in fact, Toyota's first vehicle reveal at a major music festival, though Toyota has been a presenting sponsor of Stagecoach for seven years.

Toyota says the 4Runner vehicle reveal will be hosted by SiriusXM's Buzz Brainard. The unveiling, which happens on Toyota's on-site stage includes with performance by country artist, Dierks Bentley. Leading up the event, Toyota will run a  sweepstakes hosted on its Facebook page.

The automaker is also getting its sponsorship buck by doing a whole lot of experiential activations at the concert with a program called "World of Wonders." The venue will recreate a Steeplechase Park-style carney, without the Steeplechase. The Toyota circus affair gives brand space to the automaker's other nameplates with vehicle-thematic games like a "Camry Claw" grab-it game using a custom Camry; a RAV4 Palm Reader; A Tundra Strongman where people get the message about the towing power of Toyota’s pickup. And there's a Tacoma Charging Station, which they probably didn't have in 1920 (and which might have been better matched with the Prius plug-in).

There are also things like line-dancing lessons, a tattoo parlor (not the permanent kind, which could lead to all kinds of trouble), and a place where you can make leather accessories.

Toyota will also do an off-road test-drive program for current-year 4Runner, Tundra, Tacoma, Sequoia and FJ Cruiser models. Toyota says that for campers it will spring for complimentary breakfast burritos, Stagecoach RV flags, run a bean bag battle tournament and a display of the Tundra that towed the Endeavour to its final resting place in Los Angeles, The California Science Center.