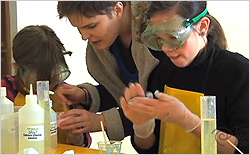 As a company with technology at its core, Time Warner Cable has a vested interest in ensuring the next generation of American workers is well-educated in the fields of science, technology, engineering and math (STEM). And, to interest kids who may become future workers, the company has launched a public service campaign combining the worlds of science and sports.

“We created this program to raise awareness. Studies show 60% of future jobs will be in STEM fields,” Eric Mangan, a representative for TWC, tells Marketing Daily. “’STEM in Sports’ is a new segment to help young people understand science is all around us, especially in sports.”

The STEM in Sports initiative is a new segment of TWC’s $100 million, five-year Connect a Million Minds initiative, which launched in 2009. The STEM in Sports segment will use public service announcements and other outreach initiatives to help parents, coaches and other adults spur an interest in STEM. In the first PSA, New York Giants wide receiver Victor Cruz appears in an ad to show how math and science are important to football.

“Football isn’t just a game of running, catching and salsa dancing,” Cruz says in the PSA. “There’s also velocity, trajectory and momentum. On the field and off, science and math are a winning combination. Getting your children excited about these subjects now can lead them to great jobs in the future.”

In addition to the PSAs, TWC’s Connect a Million Minds website, will feature a STEM in Sports microsite that will include videos of other athletes (such as golfer Ian Poulter, NASCAR driver Kasey Kahne) explaining how STEM subjects affect their sports, as well as downloadable educational materials for parents and coaches to increase STEM learning in sports. Cruz will also use his @TeamVic Twitter account to promote STEM in Sports via trivia contests.

As the PSA suggests, the investment in STEM programs is an investment in TWC’s continued success, Mangan says. “In many ways, we’re a tech company, and we have a great interest in ensuring we’re going to have the employment base for the future.”