Either The Bots Are Buying $4 Bil. Worth Of Goods, Or You've Got Some Explaining To Do...

Machines have helped make the buying and selling of inventory easier, but when they are told to buy and sell fraudulent inventory, a lot of money ends up stolen and or lost. New research from Solve Media shows that on 2013's current path, advertisers could lose more than $3 billion online and up to $1 billion in mobile due to ad fraud. In addition to ghost sites, publishers and advertisers also need to be wary of bots that provide fraudulent clicks and impressions to boost sites up in indexing tools such as comScore.

Ari Jacoby, Solve Media's CEO, spoke with RTM Daily about the issue. Jacoby said that Solve Media gets all of their data from the security transactions they process daily. The report found that online, an astounding 40% of Q1 2013 traffic was suspicious, with 29% of it being confirmed as bot traffic. On the mobile side, 29% of the traffic was suspicious, 14% confirmed as bots.

Citing the (potentially misquoted) quote from Willie Sutton. Jacoby rhetorically asked, "Why do you rob banks? Because that's where the money is."

While the amount of suspicious online traffic (40%) didn't change from Q4 2012 to Q1 2013, Jacoby said that the issue has not improved, especially in mobile. In an earlier statement, Justin Somaini, chief trust officer at Box and a member of Solve Media's security advisory council, said, "The barrier to entry for fraud and bots in mobile is almost 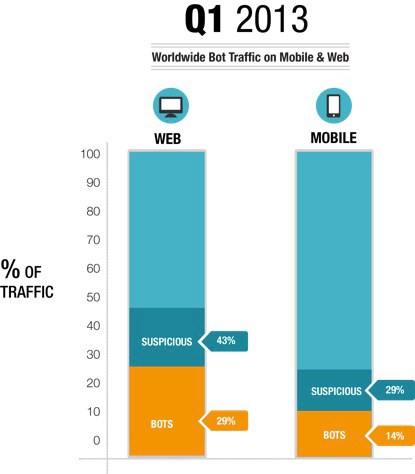 Jacoby agreed with that statement and compared mobile security to a toddler when set side by side with desktop security. "…[B]ots frequently can masquerade as mobile users to take advantage of those lower security levels," he said. Because mobile traffic has increased much faster than "anyone had originally anticipated," its security has a lot of catching up to do.

Another interesting find from Solve Media is that 71% of Singapore's mobile traffic and 67% of the United Arab Emirates' showed up as suspicious. In the US, only - and "only" is used relatively, becuase it's still a high figure - 19% of mobile traffic was suspicious. Jacoby said that he doesn't know why Singapore and the United Arab Emirates are linked to suspicious activity, but the findings are significant nonetheless.

Jacoby commented that self-policing when it comes to inventory is more important now than ever before. So what advice did he offer advertisers wanting to self-police and avoid selling ads to non-humans? "Agencies and marketers can really seek out publishers that are taking a proactive stance…against online and mobile bot traffic." Basically, it all comes down to whether or not humans make the right choices, which means, of course, that they need to do their homework.

At a potential $4 billion (combined) lost or stolen dollars in 2013, the bot issue has risen to the surface. Obviously, none of this would be an issue if December rolled around and machines and robots had purchased $4 billion worth of goods throughout the year. However, our issues would be much more significant than ad fraud at that point.

click fraud, display, mobile, online, real-time
2 comments about "Either The Bots Are Buying $4 Bil. Worth Of Goods, Or You've Got Some Explaining To Do...".
Check to receive email when comments are posted.
Read more comments >
Next story loading