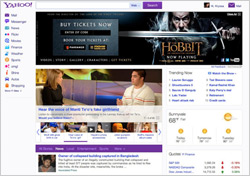 Jumping on the native ad bandwagon, Yahoo is launching a pair of new ad units that include an in-stream format for the desktop and mobile screens. The other new offering is a more standard billboard ad.

Dubbed Stream Ads, the new ad native ad type will feature sponsored posts that appear in the stream of content that users see on the redesigned Yahoo home page, as well as in news summaries in the newly updated Yahoo Mobile app.

Yahoo did not provide pricing details for either of the new ad units.

The step is similar to Facebook’s rollout of Sponsored Stories in the news feed last year and Twitter’s launch of Promoted Tweets. It also follows the broader embrace of native advertising, which aims to blend seamlessly with surrounding content on a page, by other social properties and sites from Tumblr to Pinterest to Buzzfeed.

With the launch of its infinite-scrolling news feed in the revamped home page in February, Yahoo now has a place to integrate its own flavor of native ads. “The more our users spend time with Yahoo, the more relevant and personalized the content and advertising become. Stream Ads are the sponsored twin to our newsfeed articles and are every bit as personalized and engaging,” wrote Yahoo CEO Marissa Mayer in a blog post today.

A sample Stream ad shown in the blog post shows a unit that resembles any other article with headline, synopsis and thumbnail image, except for having a slightly different shading and carrying a “sponsored” label at the bottom and the AdChoice icon in the upper right corner.

The new ad unit is also a natural fit with the stream of bite-size news items in the revamped Yahoo mobile app released last week that incorporates technology from the Summly app it acquired in March. Mike Kerns, vice president of product and media at Yahoo, told TechCrunch that the message to advertisers of the Stream Ads is that Yahoo wants “to commit to investing in new advertising experiences.”

The company did not name any initial advertisers in connection with the ads, which include only text and images at launch. Yahoo on Monday also announced a more traditional ad type in the form of an IAB-standard billboard that sits atop the home page, similar to YouTube’s masthead ad favored by movie studios and other media industry marketers.

Mayer said advertisers could use the brand placement to deliver richer interactive content. “For example, a movie trailer that runs on the Billboard could link to more information about the film and cast, and let you buy tickets directly from the ad. We believe that advertising like this can be fun and engaging for users, while also effective for advertisers,” she wrote.

The debut of the new units shows that Yahoo is trying to catch up with more recent ad trends like native advertising, while building on its historical strength in providing a home for attention-grabbing display campaigns for new movie or other product releases.