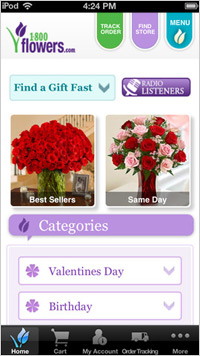 For early online marketer 1-800-Flowers.com, its search ads on Google are still the core of its digital advertising efforts. But the retailer is allocating spend across social media and mobile platforms as customer usage shifts to those channels, according to Amit Shah, the company’s vice president, online, mobile and social media.

In a Webinar hosted by Macquarie Securities on Monday with Shah, he explained that the company focuses online advertising on Facebook and Yahoo, along with Google. While it is using almost all ad products on Facebook (except for the logout ad), mobile lately accounts for the biggest increase in spending on the social network.

In particular, 1-800-Flowers is ramping up its use of Facebook’s app install ads in advance of Mother’s Day on May 12. The company has seen positive results with the format to date, paying less than $5 per app download to date on Android and iOS compared to about $10 or more per download on other third-party app distribution options.

In its first-quarter conference call last week, Facebook said 3,800 developers had used app install ads to drive nearly 25 million downloads, and 40% of the 100 top-grossing iOS and Android apps were using the format it introduced last fall. Shah said the ad unit helps to improve a “broken” app discovery process, according to the Macquarie report.

The company is also more bullish on driving mobile app downloads rather than driving traffic to its mobile site, since apps generate deeper engagement and higher lifetime customer value. Whether through the mobile Web or apps, 1-800-Flowers is seeing a much bigger share of its overall traffic coming from mobile. Of its total digital audience of 2.4 million in March, 918,000 were mobile-only, according to comScore data.

Beyond Facebook, 1-800-Flowers is also using social properties, including Twitter, YouTube and Tumblr. But with its focus on direct-response advertising, CPMs on smaller platforms tend to be too high for the type of scale it needs online.

With 700 million users, Yahoo has that type of reach. 1-800-Flowers recently returned to the Yahoo home page after more than a year without an ad buy once the Web portal improved its ability to help advertises track the success of campaigns, according to Shah.

In relation to third-party targeting, Shah expressed skepticism about the value of layering on outside data to improve ad results. Given the higher expense of third-party data, he said 1-800-Flowers is typically better off showing an ad across a broad audience at a lower CPM. He also questioned the validity of data that has not been independently verified, especially when it comes to mobile location-based targeting.