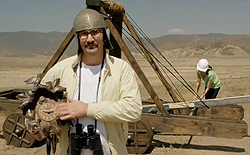 In an effort to encourage Millennial men to slip into its new ComfortBlend socks, tee shirts and undies, Hanes is introducing a new video campaign, leaving a trail of smashed cuckoo clocks, Ming vases, cantaloupes, and baby violins in its wake.

Four separate videos are running on both digital and mobile channels, starring a doofy character named Al Lenderson, flanked by khaki-clad assistants, and spotlighting the cushiony comfort of the new line.

Hanes is no stranger to using humor to sell comfort -- including TV efforts that solve men’s deep problems such as itchy neck tags and bacon neck, starring basketball legend Michael Jordan. “But we wanted to do something to specifically introduce this new line to young men,” David Robertson, Hanes director of marketing, tells Marketing Daily. “We know Millennials like videos, and destruction videos especially. So we set them up as, 'sure, Hanes is soft -- but is it soft enough to do this?”

He says he thinks the “Soften the Blow” videos, from agency 360i, will appeal to “just about anybody who ever had to do the egg drop experiment for science class.” And humor suits the category, he says, “because we are not talking about saving the world. It’s personal -- just about everybody wears it, and it’s easy to have fun with.”

The video campaign represents a tactical shift, he says, in that it is aimed exclusively at men. While men have been buying an increasingly larger percentage of men’s underwear in the last 10 to 15 years, he says, “women continue to be a significant audience for in our other lines, buying products for their husband and son. So we typically test all our ads among both men and women.” Not in this case, though. Ads are aimed squarely at the 18-to-34 male demo, “so the humor is a little different.”

The videos are being promoted via paid media, in both mobile and digital, and a social component is reaching out to the brand’s 2.5 million Facebook fans, as well. “We’re really getting the videos out in front of people,” he said, including a 19-second teaser. ‘We’ll see how well it does, and then decide if there will be a second phase.”