The Whole Story - Homes and Gardens (and Media) 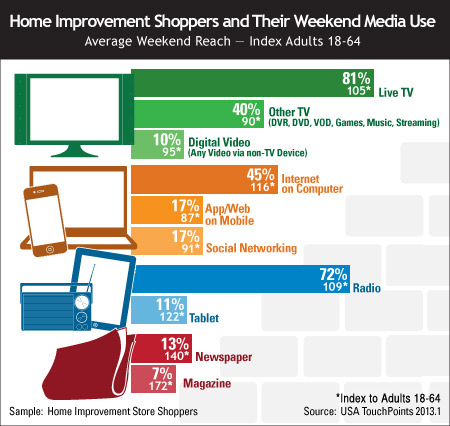 Weekends are big for Home Depot and Lowe’s. As countless thousands use the precious two days of “rest” to put in a new deck or acting out the wish list they’ve built from weeks of watching HGTV and trolling around on Pinterest, the cash registers at both Home Improvement stores across the land ring loud and long.

With weekends accounting for so much business, it becomes critical to ensure that potential customers are reached effectively before they are likely to visit the stores.

This USA TouchPoints analysis looks at which media are more or less likely to deliver Home Improvement shoppers on the average weekend by average weekend reach and indexed against adults 18-64.

While the case for TV and Radio are obvious, and the development and use of mobile marketing is largely carried by the medium’s proximity to point of sale, print media cannot be expected to fall off the schedule any time soon. Not if we look at the data. Its reach may not be particularly high, but with the right titles, it can deliver the Home Improvement shopper.