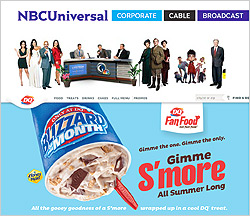 Publicis Groupe’s Spark Communications has paired two clients -- Dairy Queen and NBC Universal’s Fandango -- with an array of other media assets at NBCU to create a cross-platform campaign designed to put smoothies and movies top of mind among female consumers as the summer blockbuster movie season gets underway.

For Dairy Queen -- which spent about $67 million on ads last year, according to Kantar -- the campaign is an early initiative in an accelerating effort to make customers aware that its subsidiary brand of Orange Julius smoothies are now available at Dairy Queen outlets nationwide.

DQ has owned the Orange Julius line for years, but only recently added the smoothies brand to the DQ menu.

The new campaign targets women planning a night out at the movies with female friends. To communicate the message about the DQ smoothie tie, Orange Julius began sponsoring the Summer Movie Guide on Fandango.com earlier this month. “Orange Julius premium fruit smoothies now in your DQ,” state banner ads located at the site.

For the smoothie-minded moviegoer, there’s a DQ locator at the site for coordinating a smoothie treat before or after the show. As a further incentive, online ticket buyers receive an Orange Julius coupon with their purchase.

There is also a Facebook tie-in for those coordinating plans with friends via the social network with the option of a customized message with a reminder to stop at a DQ.

“The campaign is about fans,” both movie fans and DQ fans, said Miraj Parikh, vice president and media director at Spark. The fan theme ties into DQ’s broader positioning in the marketplace as “fan food” as opposed to fast food. Among quick-service food chains DQ has one of the largest Facebook followings, asserted Parikh, giving Fandango an added promotional boost among DQ enthusiasts during the campaign. “There’s a special kinship” between DQ and its customers, he said.

To drive traffic to the Fandango site, custom billboards and vignettes are airing on NBCU TV networks E!, USA, Syfy and Oxygen. The messages are presented during movie time periods and also prime-time series, such as USA’s "Burn Notice."

According to Parikh, the combination of platforms gives the campaign more bang for the buck, which is important to a “challenger brand” like DQ, he said. The food chain is frequently outspent by competitors on TV by four to one or more. “The multimedia and experiential elements” help to minimize the impact of the client’s underspend on TV, he said.

Parikh added, the campaign has a number of “success metrics” to track ROI, including coupon redemptions and store locator usage, among others.