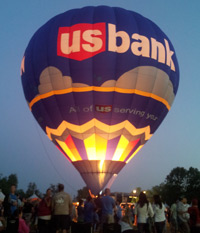 A friend bought a Groupon from Sunrise Balloons and we booked the reservation to take the flight last weekend during the Temecula Balloon and Wine Festival. I went to unplug, take a ride in a hot air balloon and get away from technology for a day. It didn't turn out that way.

The morning one-hour flight, which rose to about 2,500 feet above wine vineyards and grapefruit orchards, gave me a new perspective on social media. In the evening we went to the festival to watch the "glow" at sunset. About eight balloons, including one from U.S. Bank, were positioned on the lawn. While the flame heats the air within the balloon to make it fly during the day, in the dark it acts as a glowing light inside the balloon to light the sky.

U.S. Bank, in my opinion, missed an opportunity to capitalize on its physical sponsorship to connect with thousands of festivalgoers, their friends, and friends of friends. I'm not sure of the company's investment in the sponsorship -- whether they rented or bought the balloon and basket -- but one pilot told me a typical setup runs about $75,000.

There were about 5,000 people in the immediate area, the majority taking pictures with a camera phone. They took pictures not only of the balloons, but their friends and loved ones in front of the balloons. So I wondered how many pictures festivalgoers would take that showed a portion of the U.S. Bank balloon.

What if three-quarters of the people attending the balloon glow took one picture and uploaded it to Facebook or tweet on Twitter? How many of those pictures might include the U.S. Bank balloon? What if one-quarter of those posts were retweeted? How many of those photos are searchable in search engine query results, on Twitter or in Facebook Graph Search?

It works for broadcast television. Last year, 32 million people in the United States tweeted about TV programming, from the Super Bowl to "American Idol."