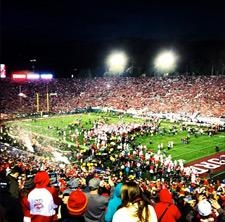 Being a fan these days means a lot more than it used to. Electronics company Vizio is looking to capitalize on the consumers’ public allegiance to everything with a new online social community called “Fandemonium.”

The initiative gives consumers a chance to declare their enthusiasm on a variety of topics ranging from sports, music, movies, gaming and other areas. Participants earn points by participating in certain activities (such as retail check-ins, viewing and/or reviewing products and product registration) and can redeem them for prizes such as Hulu Plus and Netflix subscriptions, M-Go Movies and autographed memorabilia.

The current Fandemonium experience grew out of a promotion the brand launched as part of its Rose Bowl sponsorship. That promotion encouraged fans of the University of Wisconsin and Stanford University to declare their allegiance to their teams, and gave them a forum to cheer their own team while jeering the other. The promotion also encouraged fans to post pictures to the site, which were then shown on the Jumbotron at the game.

“We looked at the Rose Bowl and said, ‘There’s some really great fans. How can we allow them to express their devotion and get some credit for it?’” Lily Knowles, vice president of product marketing for Vizio, tells Marketing Daily. “It really resonated and picked up steam. We thought, ‘What if we could do this on a continuing basis?’”

The new, expanded Fandemonium is meant to bring together fan aspects from all different areas, including music, gaming, sports and popular culture, Knowles says. Right now, all of the categories are being used together, but once the community develops, they are likely to be separated out.

“Later, as we have built up a fan base, it will be more segmented,” Knowles says. “We want to see how it develops, and then we’ll add depth to it.”