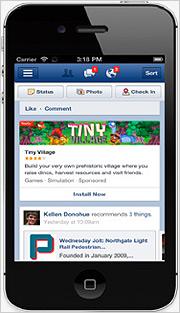 Facebook recently announced plans to cut its number of ad units in half. New findings on the effectiveness of various Facebook ad formats in the first quarter support the social network’s move to effectively merge Sponsored Story ads into other ad units to give them social context.

The Salesforce.com report looked at click-through and other interaction rates, as well as CPMs and cost-per-click (CPCs) for 11 different Facebook ad formats, including Like, Page Post, Mobile App Install, Event RSVP, and several flavors of Sponsored Story ads tied to actions like check-ins and app use. The research overall was based on 114 billion impressions across 25 countries on Social.com, Salesforce’s social advertising arm.

Click-through rates were highest for Sponsored Page Post Action, Sponsored Page Post Like, and Sponsored Check-in Story ads, at 2.1% to 3.2%. Page Post ads were close, with a CTR of 2%. At the other extreme were app, Inline Like, Action Story and Event RSVP ads, which all had CTRs below 0.05%, but were significantly cheaper than other ad types on a CPM basis.

The highest-priced format was the Sponsored Check-In, with a CPM of $6.27, followed by the Mobile App Install ad ($5.68) and the Sponsored Page Post Like Story ($4.58). The Sponsored Story ads were among the least expensive on a CPC basis, with the notable exception of Sponsored App Action ads, which were the highest, at 58 cents.

The Salesforce report noted that those ads cost 25% more per app install compared to their non-sponsored counterpart, but drive installs at nearly six times the rate. Similarly, Sponsored Page Like ads cost 43% more than regular Page Like ads, but were 13.7 times better at generating Page Likes.

By turning organic user posts about products or brands into ads, Sponsored Stories have generally outperformed units that don’t have that social context. That’s why Facebook last week said it was phasing out Sponsored Stories as stand-alone ad units and effectively merging them into all ad products to boost performance and simplify ad-buying.

“Previously, advertisers had to specify when they wanted to add social context to ads or run separate Sponsored Stories. Now, we will add social context to all eligible ads, making it easier for marketers and reducing the number of ad units,” explained Facebook's Director of Product Marketing Brian Boland last week, discussing the changes.

The study also looked at ad performance and cost on Facbook by industry. The telecom and publishing industries had the highest click rates -- at 0.91%, and 0.79%, respectively -- while deals and dating-related businesses had among the lowest, at 0.16% and 0.27%.

Facebook CPC and CPM rates were closer in the U.S. at 24 cents and 67 cents, respectively.