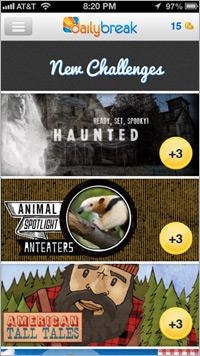 Native advertising has become such a loaded term nowadays that I am loath to use it except tentatively, in quotes, and packed in qualifications. As the recipient of countless press releases from publishing touting everything from in-content banner ads to familiar branded entertainment as “native,” I can tell you that the term is officially out of control.

Regardless, if “native ads” are supposed to slip seamlessly into the content experience and to mirror much of that context, then I would say DailyBreak qualifies as well as anyone. Their daily games and challenges integrate brands into the game experience, during which regular players accrue rewards points. These “branded challenges” have some promotional assets like embedded videos and other content that are part of the mini-game itself.

While I can’t say why the company didn’t do this long ago, DailyBreak has taken the model mobile in an upgraded app and launch sponsor. Mondelez’s Halls brand cough drops get their own branded contest in the mix of the mobile app. The Let the Cool In challenge allows the user to vote on what is cool in this trivia game.

Is this scale enough to please most marketers? It all depends on goals and how the marketer is leveraging the leads or data from a campaign like this with limited reach. Mobile, of course, is one opportunity to scale it more effectively.

DailyBreak says the mobile app adds to the mix more precise geographical targeting of these campaigns, so that challenges can be used to drive actions in specific regions. The mobile app also adds the potential for challenges and campaigns to use an AR element as well as geofenced triggers and alerts.

This is the kind of alternative advertising model that seems more viable on mobile than on the desktop. The snackable challenges are tuned to mobile use cases. The app platform arguably makes it easier to remember that you even have the resources available than a browser bookmark. And the app ecosystem does allow for different routes of distribution that are not available to the desktop.

It seems to me that the goal of native ads should not be simply to streamline and disguise an ad as content. It should be to enhance the experience the person came to the media brand for in the first place. After two decades of digital marketing where brands have aspired to be more like publishers, the hard, cold truth is that people just aren’t that into you as publishers.

Good media and content providers who craft consistently relevant and enjoyable experiences attract people. Ninety-nine percent of brands just can’t pull that off, no matter how much they want to pretend otherwise. In many ways the rise of this newfangled (if it is that) native ad trend reconfirms a very traditional dynamic. Media attract audiences because brands need someone with a better daily relationship with the user to do it for them.