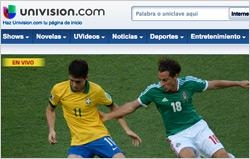 Reflecting the growing size and importance of the U.S. Hispanic market, TV broadcasters have been moving to increase their original content offerings in recent months. The latest addition comes from Univision News, which has teamed with Penske Media, owner of Variety, to create a new short-form entertainment video feature for Univision’s “Primer Impacto” (First Impact) called “Variety en Primer Impacto."

The 2.5-minute segment, which rounds up Hollywood entertainment news with a focus on Hispanic stars and media personalities, is available on all Univision platforms, including broadcast, online and mobile channels. The feature is being produced in Los Angeles by Penske Media, with Michael Davis of Penske and Pilar Campos of Primer Impacto serving as executive producers.

Primer Impacto airs on Univision at 5 p.m. on weekdays, and features U.S. and international news, as well as human interest stories and Spanish-language weather and sports.

This is just the latest in a series of new content offerings from media companies targeting U.S. Hispanics.

Also last month, Telemundo Media launched Fluency, a multiplatform video production studio based in Los Angeles, to produce content in both Spanish and English, in categories ranging from romantic comedy to science fiction and adventure. Programming will be distributed by Telemundo owner NBCUniversal across platforms including broadcast TV, subscription video-on-demand and mobile.

Back in 2009, Univision upped its investment in original content with the launch of a new production company, Univision Studios, based in Miami. The studio produces programming that includes original telenovelas as well as reality shows, dramas and entertainment specials