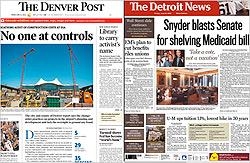 Digital First Ventures, the venture-capital division of Digital First Media, has formed a strategic partnership with NewsCred, which specializes in digital content marketing and syndication. The deal will give Digital First’s MediaNews Group and 21st Century Media access to NewsCred’s technology, as well as allowing the partners to share content with each other.

Under the terms of the deal, Digital First’s digital news properties can now draw on NewsCred’s publisher network of over 2,500 content producers for articles, images and videos, and vice versa. The partnership should enable Digital First to rapidly expand existing content categories and establish itself in new ones, according to Digital First Editor in Chief Jim Brady, who said NewsCred content will “supplement the original reporting of our network of local journalists.”

Earlier this month, Advance Digital partnered with Echo to provide a digital infrastructure to encourage audience engagement and enable social sharing at its 12 local media properties, which include newspaper Web sites and local news sites, like OregonLive.com, Nola.com, and NJ.com.

The new cloud-based capabilities will allow Advance publications to create real-time social experiences around online content, with features including live newsfeeds from reporters and readers, crowdsourced content and real-time discussions.

In January, Cox announced that its newspaper publishing division has partnered with Adpay to create a new classifieds platform serving over 4 million print and online readers in a number of markets. In March, Media General launched a new marketing and advertising service called Advanced Digital Solutions that taps into a network of partners to give advertising clients access to premium ad inventory across various channels, including display, mobile, video, email and search engine marketing